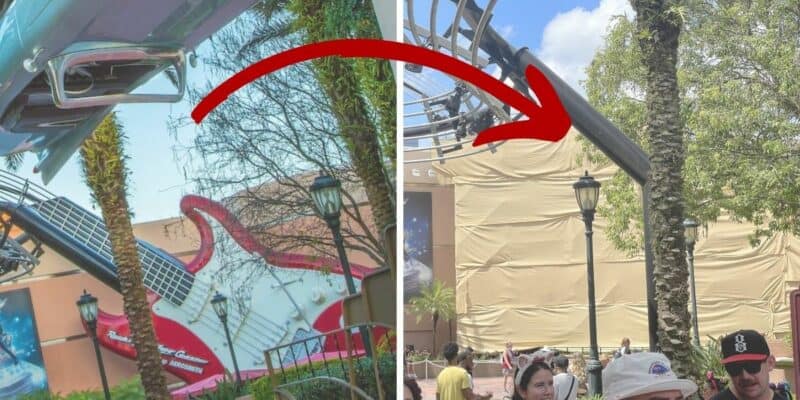 Rock ‘n’ Roller Coaster is a high-speed coaster located inside Disney’s Hollywood Studios at Walt Disney World in Florida that seems to draw crowds day in and day out.

On a recent trip, we noticed that one of the iconic elements of Rock ‘n’ Roller Coaster has been covered up!

In the image above, you can see the iconic guitar sitting outside of the Rock ‘n’ Roller Coaster show building. Many Guests tend to use this guitar as a backdrop for the picture-perfect photo. Well, if you are planning on visiting Hollywood Studios in the near future, you may want to find a new photo spot as Disney has covered up the iconic guitar with scaffolding!

Inside the Magic was visiting Hollywood Studios today and noticed that the guitar cannot be seen from afar and, instead, giant brown scaffolding is up.

At this time, we do not know why Disney covered up the guitar, but it could be relating to the upcoming 50th anniversary, which kicks off in just a few days!

We already know that Imagineers have been repainting several attractions at Magic Kingdom, including Peter Pan’s Flight, Buzz Lightyear’s Space Ranger Spin, Jungle Cruise, and more! Therefore, whatever the reasoning behind the scaffolding is could be related to the 50th anniversary as well.

Perhaps, Imagineers are repainting the guitar so it is in tip-top shape for the start of the 50th anniversary, or doing other repairs on the iconic Rock ‘n’ Roller Coaster element. Inside the Magic will update you as we get information.

What do you think Disney is doing to the iconic guitar at Rock ‘n’ Roller Coaster? Let us know in the comments below.

If you want to visit Disney World to ride Rock ‘n’ Roller Coaster, start planning your trip today with the help of our friends over at Academy Travel!