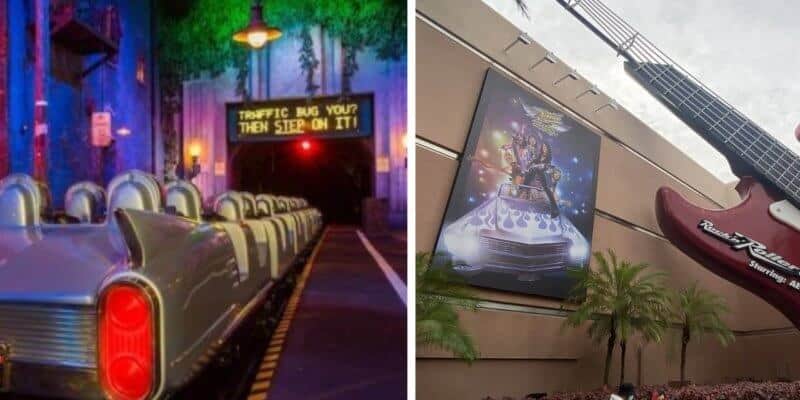 Disney’s Rock ‘n’ Roller Coaster Starring Aerosmith is an indoor coaster that blasts ‘Walk This Way’, ‘Ragdoll’, and other classic Aerosmith tunes in your ear as your super-stretch limo blasts from 0 – 60 mph. Lately, the coaster has seemed to hit some roadblocks on the way to those backstage passes, but the show must go on!

Most recently, from January 1 – 5, 2021, Rock ‘n’ Roller Coaster was down. The attraction became temporarily unavailable with no notice, which leads this reporter to believe the issue was technical and not planned. However, for an attraction to go down for 5 days likely means that the coaster’s problem was not a simple fix. That being said, the attraction is not only back up and running, but has had a small update to its exterior!

As you approach Rock ‘n’ Roller Coaster, not only are you greeted by the epic guitar coaster but also the recording studio building has a giant poster of Aerosmith on the facade to introduce you to the recording session (and soon to be concert) that you are attending. That poster, of course, fades over time, and also ends up weathered by the Florida sun and needs replacing — and it looks like now was the time to replace it once again!

As you can see from the close-up shot, the new posters look fresh with zero imperfections.

But is it a big deal to replace a poster?

Rock ‘n’ Roller Coaster Starring Aerosmith debuted in 1999, making the coaster around 22 years old. Although the attraction is a classic, some Guests sometimes note that the interior design of glow in the dark facades mixed with an Aerosmith soundtrack seems quite dated (albeit others like myself find the tunes to be classic). It is not breaking news that since ’99 Disney has created many more attractions with much stronger technology and innovations, and it is very likely that if Imagineering were given the budget to update the attraction, that they would do a fantastic job. This is something we have seen time and time again with classic rides such as Disney’s Hollywood Studios’s The Great Movie ride becoming Mickey and Minnie’s Runaway Railway.

Also, over in Disneyland Paris, we just saw their version of Rock ‘n’ Roller Coaster Starring Aerosmith close down for a full refurbishment as of September 1, 2019. The attraction went down to be reimagined as an Iron Man-themed coaster to include more Marvel at the park (Walt Disney Studios will have its own version of Avengers Campus). Disney is currently creating many Marvel-based additions to its parks including Avengers Campus in Disneyland Resort. Disney has also proven that they have no issue removing a classic ride such as Tower of Terror to replace it with current and more popular IP, as in Guardians of the Galaxy – Mission: BREAKOUT! at Disney California Adventure.

With all that evidence and reasoning, I personally understand why there are often discussions from many of my Disney-loving friends about replacing Rock ‘n’ Roller Coaster at Disney World.

But even with all of that being said, it looks like those who want to see the coaster go will have to wait a little longer. The attraction’s temporary closure may have had some Guests suspecting that it was the end for Rock ‘n’ Roller Coaster, but now that it’s back up and running with a new poster that Disney just added to the attraction building facade — it seems the only place the coaster is going is the Aerosmith concert. Considering the refresh is very new, I personally wouldn’t expect Rock ‘n’ Roller Coaster along with Aerosmith as the main band and musical selection of the attraction to go anywhere soon.

Currently, Rock ‘n’ Roller Coaster boasts quite the wait and is a very popular attraction at Disney’s Hollywood Studios, so it makes sense that Disney does not seem to be in a rush to retheme it. The company hasn’t said that a retheme is coming anytime soon, but we’ll report back if anything changes.

The official description of the Disney World attraction reads:

So for now, we can continue to rock this way and ride through some glow in the dark donuts with Aerosmith!