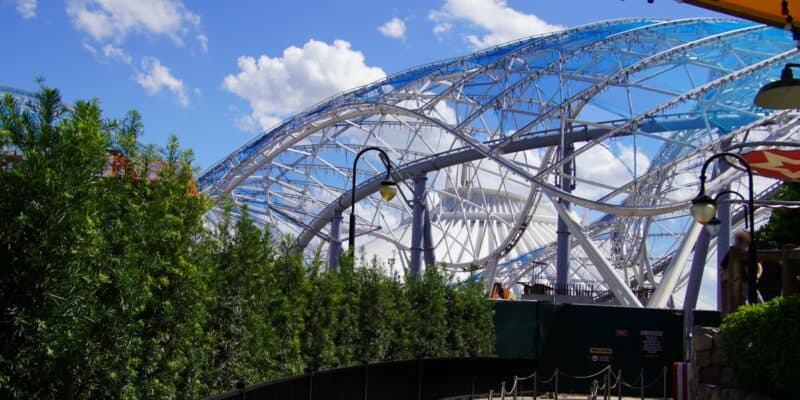 One of the most anticipated attractions that Guests have been patiently awaiting at Magic Kingdom is TRON Lightcycle/Run. The ride has been under construction for quite some time now, and although we do not have an end date or timeline, we can see Disney is clearly progressing in a forward direction.

With the canopy nearly complete, Guests can now get a sense of what to expect from the look of the attraction (especially considering we can see how it looks at Shanghai Disney Resort). One thing that TRON Lightcycle/Run does not cater to, however, is sightlines. The attraction is so massive that it can be seen from many areas of the theme park that are not Tomorrowland.

While Guests are in Storybook Circus, they can get some of the best construction views, which means that once complete, the attraction will be highly visible in the area… or will it be? We previously reported that Disney was planting shrubs that would grow to block the space between the two lands.

The original photo, as well as the updates, came from photographer (@bioreconstruct). In the image below, we can see that Disney is likely doing construction on a new building next to TRON, and since it is so close to Storybook Circus, Disney may be trying to block the smaller building, but it likely will not cover TRON as a whole.

Construction of a building next to Tron. Shrubs seen will soon grow tall and hide view of this building.

Construction of a building next to Tron. Shrubs seen will soon grow tall and hide view of this building. pic.twitter.com/GXJOOfGG7n

Suppose Disney is building another structure next to the Barnstormer queue, which already will have some theming pulled due to the TRON coaster in view. In that case, these shrubs will do a great job keeping Guests focused on the attraction and its detailed queue instead of what is going on in the land next to them.

Once close by, as you can see, the scaffolding is no longer visible (for the most part) for Guests, and as the shrubs continue to grow, more will be covered. The show building itself would be a more formidable challenge, and its coverage is dependent on just how high the shrubs will grow. Of course, the view of TRON will be very visible. This is not a massive change for Guests in the area, however, as Space Mountain has always been in view.

Current view of Tron from the Storybook Circus walkway to Tomorrowland. pic.twitter.com/yfwFYI7Lrv

Do you mind that Disney no longer puts a strong emphasis on sightlines? Or did you prefer when you could not see one land from another?