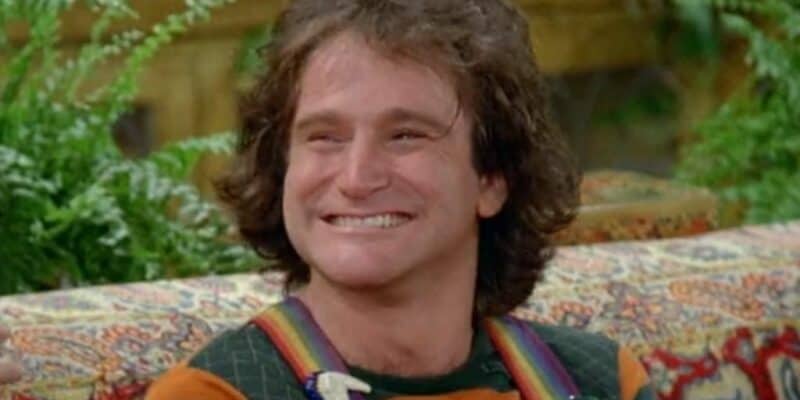 In the video, which specifically takes place on March 5, 1982 Costa depicts Williams’s reaction to series co-star Pam Dawber (Sarah Murphree) telling him that John Belushi (Blues Brothers, Saturday Night Live) — a close friend and fellow comic — died of a cocaine and heroin overdose mere hours after the men partied together.

Although the impressive footage has had fans online begging for Costa to play Williams in a biopic, there’s at least one person who isn’t so wild about the video, not because of Costa’s acting, but due to the scene selection itself.

Williams’s only daughter, Zelda Williams, has taken to Twitter to beg people to stop “spamming” her with the video. She wrote:

Guys, I’m only saying this because I don’t think it’ll stop until I acknowledge it… please, stop sending me the ‘test footage’. I’ve seen it. Jamie is SUPER talented, this isn’t against him, but y’all spamming me an impression of my late Dad on one of his saddest days is weird.

Guys, I’m only saying this because I don’t think it’ll stop until I acknowledge it… please, stop sending me the ‘test footage’. I’ve seen it. Jamie is SUPER talented, this isn’t against him, but y’all spamming me an impression of my late Dad on one of his saddest days is weird.

Williams (Good Will Hunting, Mrs. Doubtfire, Aladdin, Flubber), as movie fans undoubtedly know, was a Hollywood icon, particularly during the height of his career in the 1980s and 1990s.

When Williams shockingly committed suicide at the age of 63 in 2015, his fans, the movie industry, and — especially, of course — his family, mourned the tragic loss.

In the years since Williams’s death, his children — the aforementioned Zelda, Cody Alan, and Zachary Pym — and widow, Susan Schneider Williams, have raised awareness about the late actor’s mental health in hopes of preventing other families from experiencing what they have gone through following the Dead Poets Society (1989) star’s passing.

Zak, in particular, has been vocal about the elder Williams’s “devastating dementia” — a disease known as Lewy Body Dementia — recently sharing:

“What I saw was frustration,” said Williams of his father’s diagnosis — and misdiagnosis.

About two years before his death by suicide in 2014, doctors told Williams he had Parkinson’s disease, a disorder of the central nervous system that affects movement, causing its signature tremors.

But an autopsy would later reveal that Robin and his medical team had treated the wrong illness. “What he was going through didn’t match one to one [with] many Parkinson’s patients’ experience,” said Robin’s eldest child, whose mother is Valerie Velardi, the comic’s first wife.

Today, the Patch Adams (1998) star is fondly remembered by millions of fans around the world, many of whom would undoubtedly welcome a biographical film sharing both the positive and undoubtedly tragic, moments that he experienced throughout his life.

Robin Williams would have turned 70 years old this year.

You can watch the viral Jamie Costa video in full below:

What do you think about Zelda Williams’s plea?