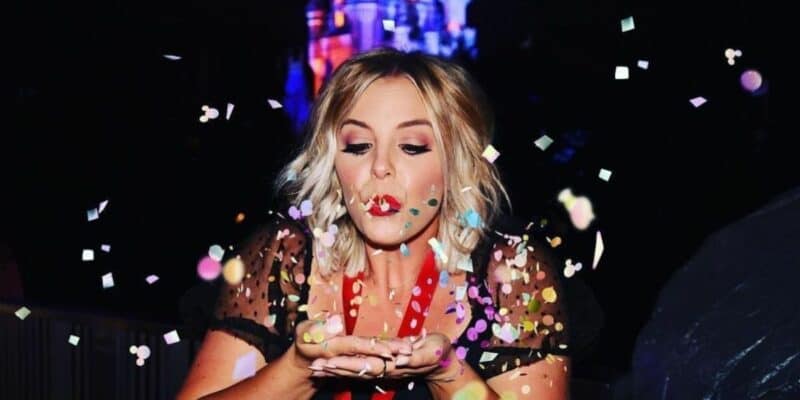 The Disney PhotoPass account on Instagram shared what they called their favorite new magic shot. Full of glitter, confetti and overall beautiful color, the magicshot overlay put the focus back on the Disney Guest and frames them so wonderfully in a Mickey confetti magic shot.

“One of our favorite new Magic Shots! We want to see how you’re kicking off “The World’s Most Magical Celebration.” Share your photos using #DisneyPhotoPass for your chance to be featured on our pages. ✨ (📷: @delightfullyjackie)”

Another Disney fan named Jackie had her moment in front of Cinderella Castle with the Mickey Confetti Magic Shot. Attempting to collect all the featured PhotoPass selections, Jackie says,

“I love the new 50th anniversary @disneyphotopass magic shots! Disney surprised guests with free photo pass downloads yesterday in honor of their 50th anniversary too! 🎉 Did you get any of the special magic shots? I hope they keep them up for a while bc I didn’t get them all!”

Disney panelist and former band teacher Jaqueline P. (wait, there are three ladies with this awesome name?!) takes her moment to celebrate with a whirlwind of Mickey head confetti with her PhotoPass magic shot. Describing her big day on October 1, 2021, she says,

“Happy, happy birthday ✨Magic Kingdom✨ wishing you 50+ more years of making people happy!
I can’t think of an entertainment venue and company that has had 50+ years rooted in stability, displayed continual growth and experienced infinite success like The Walt Disney Company!
Today, I’m off to celebrate a belated birthday at EPCOT and try to chase a sweet little rat 🐀”

Not just at Magic Kingdom, the Mickey confetti Magic Shot can be found at EPCOT, Disney’s Hollywood Studios, and Disney’s Animal Kingdom Park! Cast Member Andressa of Brazil captured her moment in front of Spaceship Earth, outfit complete with Minnie ears of the same texture. Her caption shares her love for these new specials and shares her favorite PhotoPass selections,

This translates from Portuguese as, “Continuing with photos from @disneyphotopas. This time with Epcot magic shots. Some are the same as Magic Kingdom (I loved the effects at night) and others are exclusive to Epcot. The highlight for the magic shot of the Ratatouille area that I loved! Check out PhotoPass!”

Will you be posing for the new Mickey Confetti Magic Shot with PhotoPass? Leave us a comment below!

Comments Off on Celebrate With the New Mickey Confetti Magic Shot