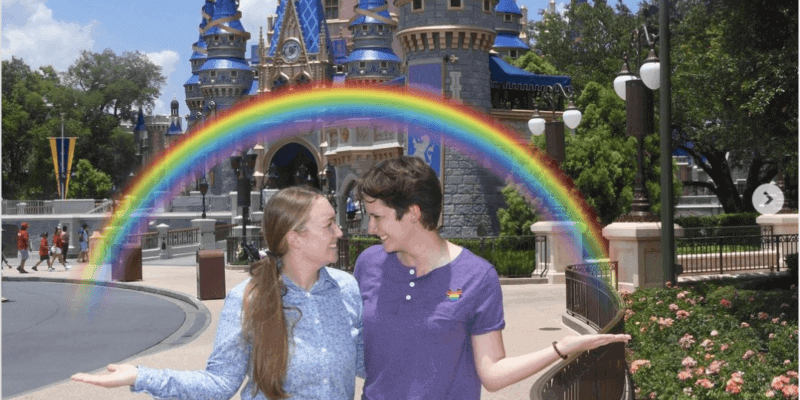 Polish up your colors! Disney PhotoPass at Walt Disney World and Disneyland is adding brilliant rainbow MagicShots and effects to select photos this month. Celebrate Pride at Disney in any of the four major parks or at the Disney PhotoPass Studio at Disney Springs for some added color and plenty of #lovewins support.

Smile for the rainbow! Disney World Guests will feel like they struck gold with two new rainbow Magicshots laced onto their PhotoPass photos this month. Available at each of the four main Disney World theme parks and both theme parks at Disneyland, these shots will vary depending on where you are, so ask your PhotoPass photographer what they might have! Two awesome options are Guests holding the ends of a rainbow, as well as rainbow corners placed onto any photo.

If you’re not in the Disney Parks this month, no need to fear (it’s been harder and harder to pick up Disney Park Pass reservations). You can step over to the Disney Springs Shopping District and find the PhotoPass Studio, which is free for all visitors. Your photos will populate into your My Disney Experience account, and you can download them at your leisure! (and if you have the Memory Maker service, they are all complimentary!) No reservation is required.

The Disney PhotoPass Studio photo backdrop is the newly repainted Cinderella Castle without its 50th-anniversary swag, but with an added full-arc rainbow over the top.

The announcement was made by Disney’s PhotoPass Photographer account on Instagram (@DisneyPhotoPass) on June 1, as the official Pride Month begins. The copy of the three-scroll photo set reads,

“During Pride Month, #DisneyPhotoPass will be offering two rainbow-filled Magic Shots at each of the four Walt Disney World theme parks and at both theme parks at the Disneyland Resort! Magic Shot locations vary by park, so be sure to ask your photographer where you can capture them during your visit. ??❤️????? The Disney PhotoPass Studio at Disney Springs will be celebrating too by offering a few colorful virtual backdrops. All are welcome, no reservations are required to visit the studio ✨”

What Rainbow MagicShots are you looking forward to getting the next time you visit Walt Disney World Resort and Disneyland Resort? Leave us a comment below!