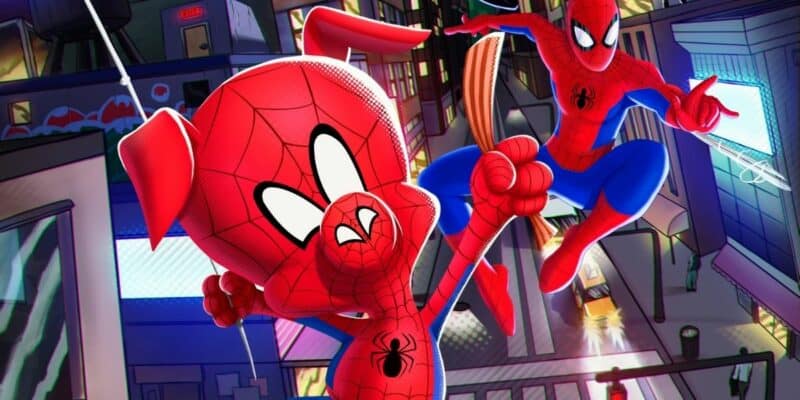 While Spider-Man is the most recognizable superhero globally, Peter Porker/Spider-Ham is one of the most beloved Marvel characters that should join the Marvel Cinematic Universe soon.

Peter, the spider, was a wholesome insect living in New York until a mad scientist named May Porker (Aunt May) accidentally turned the spider into a pig.

Peter Porker was born a spider (simply named Peter). Residing in the basement lab of May Porker, a slightly goofy animal scientist who had created “the world’s first atomic powered hairdryer,” hoping that “the introduction of nuclear fission into America’s beauty salons” would “revolutionize the hair care industry”.

After dousing her head with water and activating the dryer, May Porker accidentally irradiated herself, and in a fit of delusion, bit Peter, who then found himself transformed into an anthropomorphic swine much like May Porker herself. Running from the Porker homestead disoriented, Peter soon came to realize that he still retained a spider’s abilities.

Peter Porker, also known as “Spider-Ham” and “Spider-Pig,” was made famous in Sony’s Spider-Man: Into the Spider-Verse, voiced by comedian John Mulaney.

There’s no confirmation that Marvel is bringing Peter Porker into the MCU, but it seems like it could happen. Spider-Ham is undoubtedly one of the funniest variants of Peter Parker/Spider-Man, and thanks to the events in Loki and Spider-Man: No Way Home (2021), it’s possible that the swinging pig could join the live-action Marvel Universe one day.

Doctor Strange (Benedict Cumberbatch) is opening the Multiverse in Marvel’s New York. With it comes the Spider-Verse, meaning previous Spider-Man actors Tobey Maguire and Andrew Garfield. Along with the Spider-Men come their respective villains, including Alfred Molina’s Doctor Octopus.

There are numerous variants of Spider-Man in the Marvel collection, but Spider-Ham suddenly appearing alongside Tom Holland in No Way Home would shock every Marvel fan. Fans randomly got Howard the Duck in the Guardians of the Galaxy franchise, so now it’s time for a pig to join the fun!

Do you want Spider-Ham to join the MCU? Let us know in the comments below!