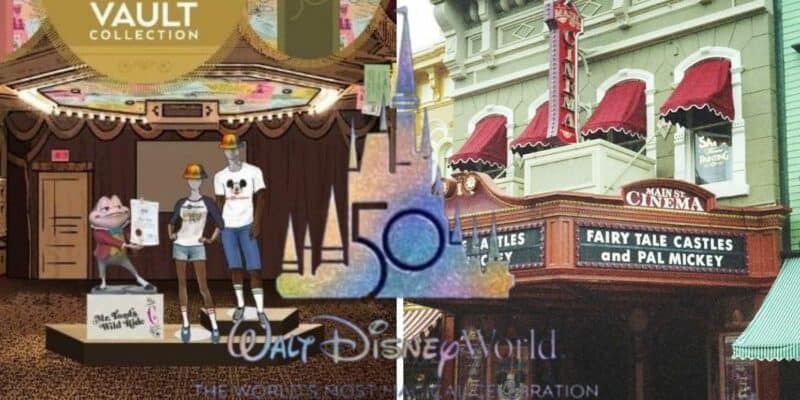 The 50th anniversary of Walt Disney World Resort — and, more specifically, the 50th anniversary of Magic Kingdom Park in Florida — is right around the corner. And in order to prepare, Disney has been continuing to keep up with theme park updates and preparations for The World’s Most Magical Celebration — which kicks off in just 10 days!

From refurbishments on the Main Street Confectionery and the Main Street train station to other improvements such as the famous Partners statue in the Hub, it is clear that Disney has been hard at work on making sure Main Street is in tip-top shape before the 50th anniversary festivities begin.

Disney Parks Blog announced that the Main Street Cinema will soon receive a retro-inspired overlay, specifically themed to the Vault Collection, which is being released for Disney World’s 50th anniversary. Per Disney Parks Blog:

Over at Magic Kingdom Park, you’ve probably already seen some of the EARidescent makeover at The Emporium, and soon the Main Street Cinema will receive a retro-inspired overlay themed to the Vault Collection. It will be filled with vintage photos, colors, and details including photo-worthy backdrops and props inspired by beloved attractions from Walt Disney World Resort history. The entire Merchandise Presentation Team has done such an incredible job taking elements from all of the Walt Disney World 50th Anniversary Merchandise collections and creating innovative and imaginative spaces for you to experience while you’re shopping for all your must-haves.

At this time, we do not know when the Main Street Cinema will unveil its new overlay, but Inside the Magic will continue to update you as we get information.

Will you be visiting Disney World for the 50th anniversary? Let us know in the comments below.

If you want to visit Walt Disney World on your next vacation, be sure to get in touch with our friends at Academy Travel. Get your free quote today!