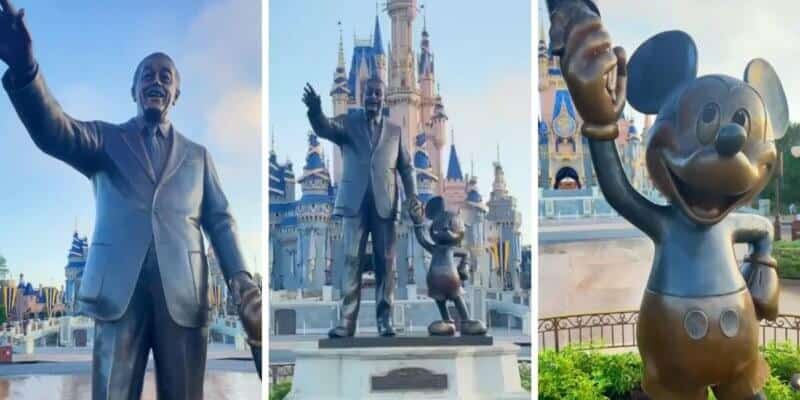 At the end of Main Street, U.S.A. in Magic Kingdom at Walt Disney World sits the iconic Partners statue, which features Walt Disney himself, hand in hand with everyone’s favorite mouse — Mickey Mouse.

Disney World’s Partners statue was first revealed at Magic Kingdom Park in 1995 and has been an iconic aspect of the theme park ever since. As Guests walk down Main Street, U.S.A. and get closer to Cinderella Castle, they soon notice Walt and Mickey and immediately stop for a picture.

For the upcoming 50th anniversary celebration, Disney decided to refurb the statue to ensure it looked good as new for the milestone. In case you weren’t aware of the refurbishment, Disney placed a sign in front of the statue, which read, in part:

The process of removing oxidation buildup from patinated bronze is intensive – involving multiple phases to strip the sculpture to its bare metal before cleaning, reapplying a patina, and coating the entire figure in protective polymer and wax.

Now, thanks to Walt Disney Imagineering, we can confirm the refurbishment is officially complete and the statue looks brand new! Per their Instagram post:

In preparation for the 50th Anniversary celebration of @WaltDisneyWorld, Imagineers from the Collections Management team recently oversaw the refurbishment of the Partners statue in Magic Kingdom Park. Originally created by famed Disney sculptor Blaine Gibson, this sculpture of Walt Disney holding the hand of Mickey Mouse has become an iconic photo location at our Disney theme parks around the world. To restore the statue to its original look, conservators stripped the sculpture to its bare metal before cleaning, reapplying patina and coating the entire figure in protective polymer and wax.

The Collections Management team helps to develop, design, curate and maintain more than a dozen galleries, and the vast collection of artwork and bronze statues that spans the breadth of the Walt Disney World Resort, including all four theme parks and many resort hotels.

With this work complete, and Cinderella Castle shimmering behind them with her royal makeover, Walt and Mickey are ready for The World’s Most Magical Celebration to begin on Oct. 1! #DisneyWorld50 ✨

The original statue in Disneyland was also refurbed last year and now both statues in the U.S. look as good as they did when they first debuted! We love the way the Partners statue refurbishment came out and cannot wait for Guests and longtime Disney fans see it in person during the 50th anniversary celebrations at Walt Disney World Resort!