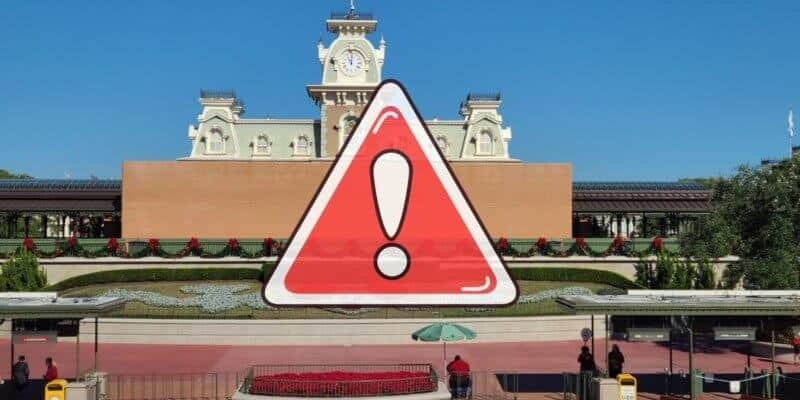 Walt Disney once said Disneyland will never be complete, and that most definitely extends to the rest of the Disney Parks that have been added to Walt’s empire. Now, it looks like the Magic Kingdom entrance once again joins team ‘never complete’.

If you have been to Disney World lately (or really, ever) there is likely never a time where you can visit and something is not under construction. Disney World is consistently not only growing at a rapid pace but always making sure what is already there is looking the best that it possibly can.

Heather (@DznyGrlSD) took to Twitter to post a monorail photo of the entrance of Magic Kingdom, and something was a little off. She commented “Why is this behind a scrim?” referring to the Walt Disney World Railroad station at Main Street, which greets Guests walking into the Magic Kingdom.

Considering the Walt Disney World Railroad has been under construction for months now, it is not too shocking to see a scrim go up in front of one of it’s loading stations, but it is a little bit of an eyesore when the entrance to a Disney Park is covering in a brown scrim.

Why is this behind a scrim? pic.twitter.com/TEQ48uulVq

The color of this scrim is also interesting to note. Disney World may often do construction, but they do their best to make sure the location being refurbished looks dainty and magical on the outside. Disney World scrims are often printed to have the matching exterior the building usually showcases or a consistent color scheme. As of lately, however, Disney seems to be late to the game in inserting these themed scrims. As we can see above, the scrim is a muted brown, which doesn’t stand out but also doesn’t match the Magic Kingdom facade either.

The Magic Kingdom attraction “it’s a small world” also had a plain white scrim covering the entire exterior for a while until they recently put up a new scrim with small world colors and patterns. This may happen because Disney is just not ready with the appropriate scrim, so perhaps the train station will become a little more as we remember it if a new scrim is being made.

At the moment, all stations are closed on the railway, but typically, you can board or disembark at any of 3 stations:

For now, we can just sit back and wait to see whatever changes are coming to the Walt Disney World Railroad Main Street entrance!

What do you think is going on behind the scrims on the Walt Disney World Railroad?