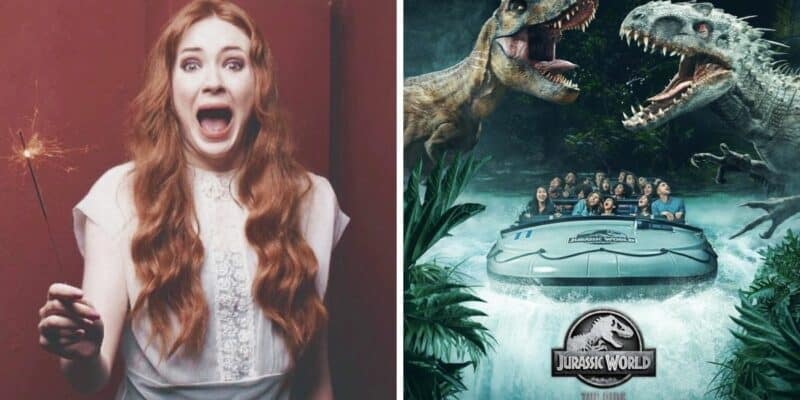 Anyone who is a fan of the Marvel Cinematic Universe knows that one of the biggest character arcs seen so far is that of Nebula — the adopted daughter of supervillain Thanos. Nebula goes from a super-assassin willing to kill her adopted sister Gamora to teaming up with the Guardians of the Galaxy and the Avengers to help retrieve the Infinity Gauntlet and defeat Thanos.

Karen Gillan began playing Nebula in 2014’s Guardians of the Galaxy and holds the role to this day. She continued to portray the villain turned hero in other Marvel films, including Guardians of the Galaxy Vol. 2 (2017), Avengers: Infinity War (2018), and Avengers: Endgame (2019). Gillan put a lot into her character and created a character who was a butt-kicking, sarcastic, and incredibly brave character in the MCU.

However, when it comes to her real life, Gillan may not be quite as tough as her on-screen counterpart. Gillain recently visited Universal Studios Hollywood for Halloween Horror Nights — which already gives her nerves of steel. She also went on some rides while at the Southern California theme park and, to put it in the actress’s own words, she “didn’t cope well”.

Gillan shared some fun pictures on Instagram of her and some friends enjoying the night, except for when they decided to go on some thrill rides.

Karen and her friends went on both Jurassic World: The Ride and Revenge of the Mummy and it appears that the attractions may have been too much for the actress. Both rides take Guests pictures at exciting moments, and Gillan — in both pictures — can barely keep herself upright and isn’t even looking up to see what is happening around her.

Both Jurassic World and Revenge of the Mummy are very popular thrill rides at Universal Studios Hollywood. Jurassic World: The Ride is the newest ride at the park, but is really an updated version of the older Jurassic Park water ride that used to be in that location.

Here is more information on the new ride from the Universal Hollywood website:

Revenge of the Mummy is also an exhilarating ride that sends Guests not only forwards through the world of The Mummy, but also backward, sending your stomach into your throat.

If you dare, face heart-pounding special effects and unexpected twists at every turn as you escape the Mummy’s revenge in life-like horror. It WILL change you … forever!

The ride catapults guests at speeds up to 45 mph in virtual darkness.

Many of the Egyptian hieroglyphics on the walls spell out real words and ancient warnings.

What Universal Studios ride scares you the most? Let us know in the comments!

CLICK HERE to book your heart-pounding Universal Studios vacation with our friends at Academy Travel – an EarMarked Diamond travel agency that can provide you with a free quote today!