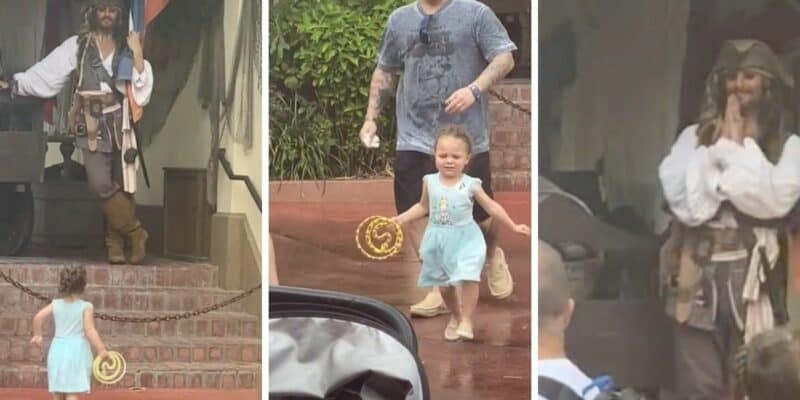 All Images: Credit Screenshot via tem1322

One of the most magical aspects of the Disney Parks is being able to see some of your favorite Disney characters come to life. From Mickey Mouse to Winnie the Pooh to the Disney princesses (and even sometimes Disney villains), the Parks are filled with iconic characters who make each and every trip memorable for every Guest.

Well, on a recent trip to Walt Disney World, one little girl was so excited when she spotted Jack Sparrow from the Pirates of the Caribbean franchise — only she thought he was just a statue and not real so when he came to life, she was completely terrified!

The encounter begins with the little girl running up to Jack Sparrow in Adventureland to get a closer look, but as she was standing there admiring him, he then suddenly “came alive”, scaring her to run away!

The family posted the video to TikTok, which you can view below. Make sure your volume is up as the music perfectly pairs with the encounter.

Within the video, after Jack accidentally scares the little girl, you can see he feels bad if you look closely in the top right corner just after the little girl starts to run away.

Though the little girl was not expecting Jack Sparrow to come to life, and she ran off completely terrified, she seemed to be okay by the end and gave fans a good laugh.

Pirates of the Caribbean star Johnny Depp has been in the news a lot lately as he has been involved in a legal battle with his ex-wife and actress Amber Heard. The case has been quite serious as Heard accused Depp of domestic abuse and holding her hostage at one point.

Depp lost the libel case and has since spoken out regarding the support of his fans and the decision by Warner Bros. for the actor to resign from his role as Grindelwald in Fantastic Beasts.

Despite the ongoing legal battle with Johnny Depp, who portrays Jack Sparrow in the Pirates of the Caribbean franchise, Jack Sparrow can still be seen in the Disney Parks around the world. There has been no confirmation by Disney that there are plans to remove the character completely.

Do you enjoy meeting Jack Sparrow at the Disney Parks? Let us know in the comments below.