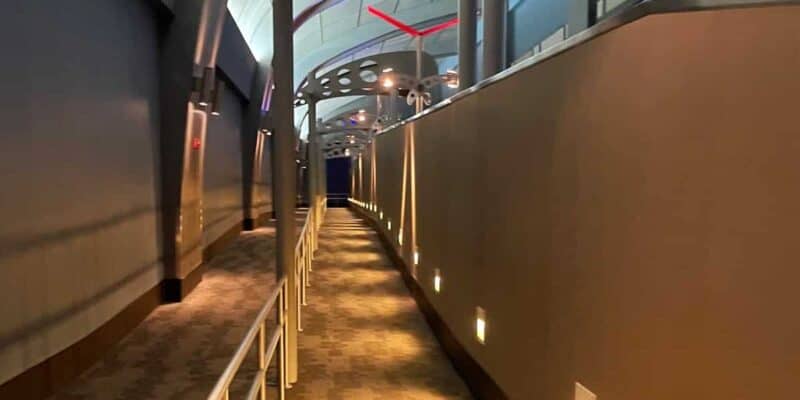 In recent weeks, it has become apparent that the crowd level at Walt Disney World Resort has diminished from what it was over the summer months.

Whether this has to do with the Delta variant of COVID-19, families around the United States returning to fall school schedules, or some combination thereof cannot be known for sure, but the fact remains that Disney World fans have enjoyed extremely short waits for extremely popular rides at Magic Kingdom, EPCOT, Disney’s Animal Kingdom, and Disney’s Hollywood Studios.

This was proven once again on September 21, 2021 when Guests at Disney World’s EPCOT theme park were able to walk onto the fan-favorite ride, Soarin’.

As you can easily see in the photos above and below, the Soarin’ queue was completely empty from start to finish. Guests were easily able to board the flight simulator with no wait, which has happened more than once lately.

It is not known if these low crowd levels will continue when Walt Disney World Resort’s 50th anniversary celebration officially kicks off on October 1, 2021. However, for the moment, Disney World Guests can still enjoy many of their favorite rides without the typical wait times.

More on Soarin’ Around the World at EPCOT

The official description of Soarin’ reads:

An Exhilarating Aerial Expedition
Feel the thrill as you’re raised high in the air and swept from one scenic locale to the next. See the world’s wonders—natural and manmade—like you never have before. No mountain is too high. No landscape is too far.

Throughout your flight, you’ll be treated to the uplifting musical score, adapted by composer Bruce Broughton from the attraction’s unforgettable original score written by Academy Award-winner Jerry Goldsmith.

Are you a Soarin’ Around the World fan?

Let the expert team at Academy Travel help you plan your next magical vacation to Walt Disney World Resort and the Disney Springs shopping and dining district!