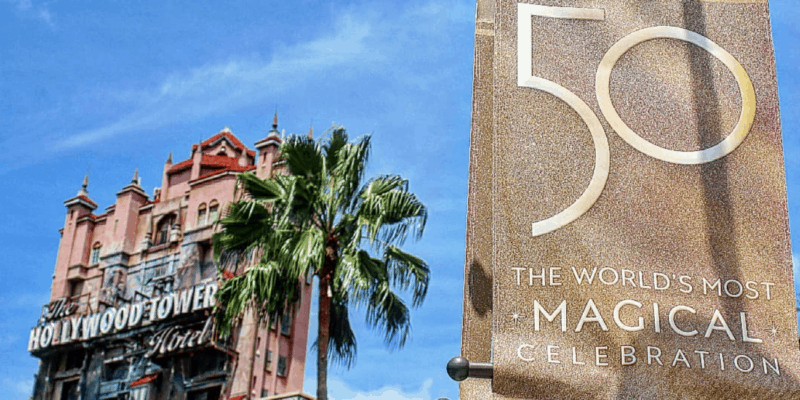 We are now only a few weeks away from the big 50th anniversary celebration at Walt Disney World Resort, and all four parks are getting ready to celebrate.

When the theme park icons were announced, we knew Magic Kingdom would decorate Cinderella Castle, Disney’s Hollywood Studios would give the Tower of Terror some shimmer, Disney’s Animal Kingdom would project onto the Tree of Life, and Spaceship Earth over in EPCOT would receive a permanent change as points of light would be added to the ball so that it would shine outward. We recently saw testing of the Beacons of Light, which you can check out by clicking here.

There have also been banners come to the parks! We originally saw the rose gold shimmer come to Magic Kingdom, but now we can see that banners are coming to the rest of the parks! Below, we will take a look at the new banners at Magic Kingdom, Disney’s Animal Kingdom, and Disney’s Hollywood Studios!

Bremtdodge (@brentdodge) showcased all of the photos on his Instagram.

Hollywood Studios’ design caters to the glitz and the glam of Sunset Boulevard.

At the moment, we have no yet seen the EPCOT banner; however, considering all of the other parks have one, EPCOT will likely have them as well. Those visiting EPCOT that day will also see the debut of the nighttime spectacular Harmonious, as well as get to ride the new attraction Remy’s Ratatouille Adventure, all while enjoying the International Food and Wine Festival!
Plus, at Magic Kingdom, Guests will be able to enjoy Disney Enchantment, the all-new firework show that has been put in place for the anniversary.
Do you think that Disney needs to add more decor to the parks for the anniversary? Let us know in the comments below.