Disney Remains Silent on TRON Attraction Updates - Inside the Magic 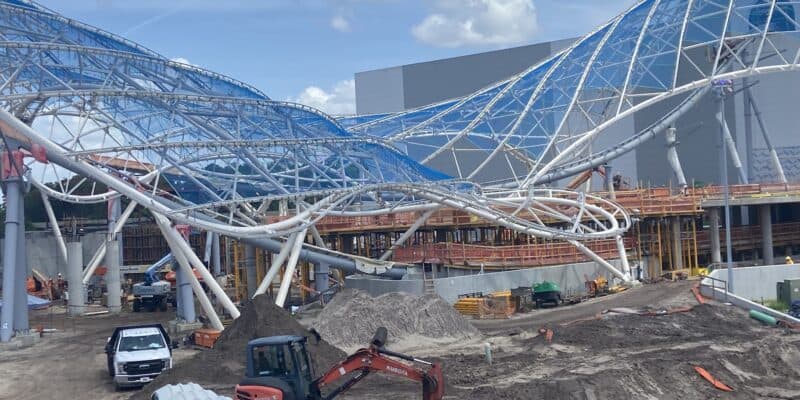 This has been a news-packed day for the Walt Disney World Resort! We just found out a tonne of news on various attractions, resorts, and offerings, but one was left out of the announcements.

Today we discovered that on March 1, the Star Wars: Galactic Starcruiser will open, Guardians of the Galaxy: Cosmic Rewind will debut in 2022 (we also got to see a private walkthrough of the attraction yesterday, which you can read more about here), MagicBand+ is on the way for Guests to interact with all of the Fab 50 golden statues, and Angela Bassett will be narrating Disney Enchantment, the new firework show.

Although there was a lot of information to take in, there was no new news on one attraction that has been under construction for a long time. TRON Lightcycle/Run has been under construction at Magic Kingdom for a while, and Guests have been patiently awaiting an opening date. The coaster still looks like it has a long way to go, and now that we have still not heard an update on an announcement-filled day, it seems that we will need to wait a while longer until we can see the finish line for the attraction.

The attraction comes from the original, which is located in Shanghai Disneyland. There may, of course, be some differences; however, the overall concept and look will be similar. During our recent construction updates, we have mentioned that shrubs are being put in place to try and create a barrier between the attraction and surrounding lands. We can also see that the canopy for the attraction looks complete.

For now, it seems that we will need to wait on further information on the attraction. The good thing is that since construction is so opening visible, we can see how far along the coaster is from the exterior. That being said, after walking through Guardians of the Galaxy: Cosmic Rewind yesterday, I can say that Disney may have work to do on the outside; the inside looks complete — perhaps TRON will be built in the same way!

When do you think TRON Lightcycle/Run will debut?