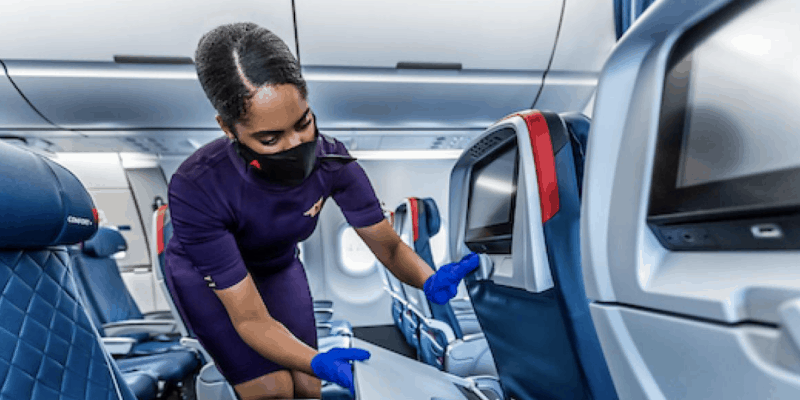 Amid the COVID-19 pandemic, both domestic and international travel have become challenging for reasons that most airline passengers could never have fathomed before 2020.

For example, due to federal mass transit mandates, all passengers over the age of 2 are required to wear face masks throughout their flights, except when actively eating or drinking — this is very similar to the mask regulations followed by Disneyland Resort and Walt Disney World Resort, who adhere to Centers for Disease Control and Prevention (CDC) guidelines.

Airlines have found themselves struggling to enforce various pandemic-era travel restrictions, particularly in regard to face masks. This has led to some unfortunate situations, including one passenger who had to be physically restrained in his seat on a Frontier Airlines flight to Miami International Airport (MIA).

Now, Delta Airlines has proposed a new version of the no-fly list for travelers who are known to be unruly while onboard an aircraft. The original United States no-fly list was implemented following the terrorist attacks on the World Trade Center and the Pentagon on September 11, 2001.

Related: More Airlines Reconnect Orlando to the Rest of the World

Per an official Delta memo about the airline giant’s proposal:

At Delta, we now have more than 1,600 people on our “no fly” list, and we’ve submitted more than 600 banned names to the FAA in 2021 as part of their Special Emphasis Enforcement Program. We’ve also asked other airlines to share their “no fly” list to further protect airline employees across the industry – something we know is top of mind for you as well. A list of banned customers doesn’t work as well if that customer can fly with another airline.

The work over these last few months by IFS leaders and cross-divisional teams to conduct a Safety Risk Assessment on current processes, as well as communication and training for crewmembers, will result in additional measures in the areas of training and response on board. We also continue to share relevant information from your submitted SRS reports with federal authorities to aide in our – and their – ability to take action. And, know that we continue working with our partners in ACS to ensure that when issues arise, we manage them together.

It is unknown how exactly the new no-fly list would be implemented, but presumably it would function very similarly to the existing list that blackballs those who are considered high-risk for violent or terroristic behavior.

Other major domestic carriers — including United Airlines, American Airlines, Southwest Airlines, Hawaiian Airlines, and Alaskan Airlines — are likely to back Delta’s proposal, though none have made official statements at this time.

Stay tuned to Inside the Magic for more on this developing story and how it could impact visitors to Walt Disney World Resort and Disneyland Resort.