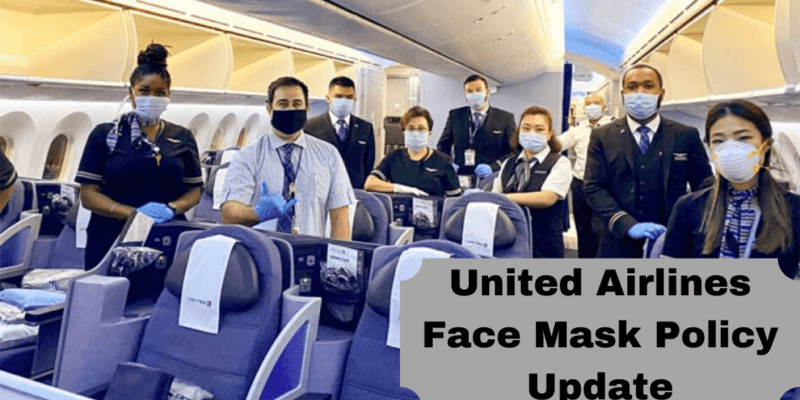 As the Walt Disney World Resort prepares to join Universal Orlando Resort in reopening its Central Florida theme parks, and the Disneyland Resort and Universal Studios Hollywood prepare to do the same in Southern California, all would-be Guests traveling aboard a United Airlines flight will now face consequences for not complying with the mask mandate. Anyone who refuses to wear a mask can be placed on an internal travel restriction list.

According to Fox News, the airline issued a statement announcing it will be doubling down on its mask requirements beginning June 18:

“If the customer continues to be non-compliant, flight attendants will do their best to de-escalate the situation, again inform the customer of United’s policy, and provide the passenger with an In-Flight Mask policy reminder card,” the statement reads.

“If a customer continues to not comply, the flight attendant will file a report of the incident, which will initiate a formal review process. Any final decision or actions regarding a customer’s future flight benefits will not occur onboard but instead take place after the flight has reached its destination and the security team has investigated the incident,” according to United’s stricter policy.

A4A President and CEO Nicholas E. Calio explained, “U.S. airlines are very serious about requiring face coverings on their flights. Carriers are stepping up enforcement of face coverings and implementing substantial consequences for those who do not comply with the rules.”

United’s Chief Customer Officer Toby Enqvist stated, “Every reputable heath institution says wearing a mask is one of the most effective things people can do to protect others from contracting [the disease], especially in places like an aircraft where social distancing is a challenge…Today’s announcement is an unmistakable signal that we’re prepared to take serious steps, if necessary, to protect our customers and crew.”

United Airlines is one of the largest US Airlines in operation implementing a face mask policy, and it is one of the many that offer flights into Orlando International Airport(MCO), and Los Angeles International Airport(LAX)–the gateways, for many, to Disney’s and Universal’s American theme parks and resorts. Its latest travel policy update is only the latest in the continued effort to stop the spread of the global pandemic.

Inside the Magic recently reported that travel restrictions requiring all visitors from New York, New Jersey, and Connecticut to self-isolate for two weeks after arriving in Florida will remain in effect. Mask wearing, social distancing, and other health and safety measures have also been individually proposed and implemented at Universal Orlando Resort, Walt Disney World resort, and at Universal Studios Hollywood’s CityWalk. Similar measures are expected to be implemented at Disneyland Resort in Anaheim, California.

What do you think about United Airlines’ policy update? Do you think it is necessary? Let us know in the comments!