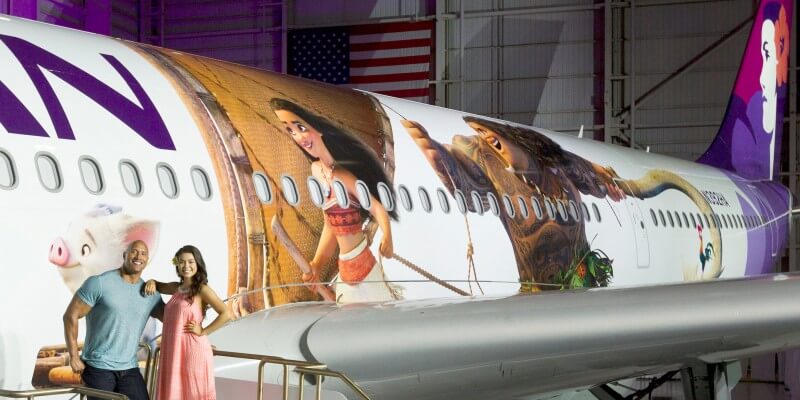 Hawaiian Airlines, in collaboration with The Walt Disney Studios, unveiled the first of three “Moana”-themed planes, an Airbus A330, at its home base at Honolulu International Airport over the weekend along with the stars of the upcoming Disney animated movie. Auli’i Cravalho, the Hawaii-born newcomer who is the voice of Moana, and Dwayne Johnson, the voice of demigod Maui, appeared at a special event alongside Hawaiian Airlines CEO Mark Dunkerley to help show off the new plane, which features four of the characters from the highly-anticipated movie — Maui, Moana, Heihei the rooster and Pua the pig. The overhead bins in the interior of the three planes will also feature additional Disney artwork from the movie and travelers will be able to enjoy special inflight entertainment inspired by the new movie. Additionally, the airline will offer limited-edition “Moana” products such as blankets, towels and apparel for purchase inflight on select Hawaiian routes or online at Shop.HawaiianAirlines.com.

According to Hawaiian Airlines, the planes will fly on Hawaiian’s regularly scheduled U.S. domestic routes as well as to international destinations including Brisbane and Sydney, Australia; Osaka and Tokyo, Japan; and Auckland, New Zealand through March 2017. Fans can track the course of each “Moana”-themed plane in real time at HawaiianAirlines.com/Moana.

“At Hawaiian Airlines, we are modern navigators, carrying guests across vast oceans to experience the unparalleled beauty of our home and richness of our culture,” said Peter Ingram, chief commercial officer for Hawaiian Airlines. “In important ways, Moana’s voyage of discovery parallels that of our guests’ own travel adventures, and we’re pleased to work with Disney to take this wonderful story to the skies.”

The airline has also begun the Hawaiian Airlines Wayfinder Caption Contest that runs through October 23 for fans in the United States, Australia and New Zealand. The winning entry will receive a Grand Prize trip for two to attend the Los Angeles premiere of “Moana” on Nov. 14 along with some sweet prizes for the runners-up. For more info on the contest, fans are encouraged to visit HawaiianAirlines.com/Moana.

Directed by the renowned filmmaking team of Ron Clements and John Musker and featuring music from Lin-Manuel Miranda, Mark Mancina and Opetaia Foa‘i, “Moana” arrives in U.S. theaters on Nov. 23, 2016.