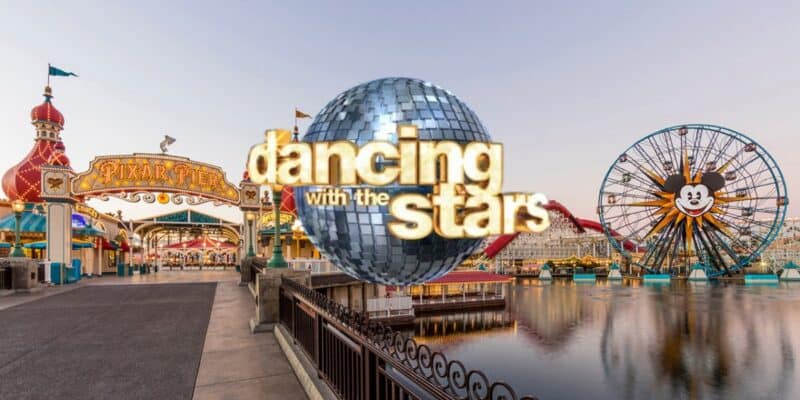 There is a lot happening at the Disneyland Resort right now. Halloween Time is in full swing, the Park has announced all of the exciting holiday events that they are preparing for, and Cast Members are all busy trying to keep Guests as healthy and safe as possible.

And now it seems like The Happiest Place on Earth may be preparing for another big event.

Guests visiting Disney California Adventure Park on September 7 may have noticed all of the work happening along the waterfront where Guests used to stand to watch the nightly show World of Color — which has not come back since the theme parks reopened in April. Instagrammer Five Fires YouTube shared a video of the massive amount of work being done.

What’s going on at DCA today? 🤷🏻‍♂️ video from @ohboyangel

It appears that the popular ABC show Dancing With the Stars is preparing to do something at California Adventure — but as to what it is, Disney Parks have made no official announcement. As you can see, there are what look like giant mirror balls — a staple of the show — in front of a large DWTS logo.

However, a picture shared by Instagrammer Gothic Rosie, also shows the Good Morning America sign — GMA is the show that announces the cast each season.

DANCING WITH THE STARS GMA FILMING

Heads up the front center stage area in the World of Color viewing space is roped off and set up for tomorrow’s filming of Good Morning America.

They will have a live presentation “revealing the full cast of @dancingabc Season 30 live with @robinrobertsgma and @itslauraspencer .” This was announced on the @goodmorningamerica Twitter account (@gma) this morning.

Thanks to @aprilg0420 for the snap 📸of the filming spot🥰!

Although a complete casting list has not been announced yet, the Dancing With the Stars Twitter account has confirmed some celebrities that will be a part of the new season of Dancing — including Jojo Siwa, who can frequently be found visiting Disneyland — as well as Olympian Suni Lee.

Bring on the sequins and the sparkles.  We’re SIWA excited for this! #DWTS @itsjojosiwa

Bring on the sequins and the sparkles. ✨ We’re SIWA excited for this! 🎀 #DWTS @itsjojosiwa pic.twitter.com/mzwezAm0An

Dancing With the Stars will premiere on September 20 at 8 p.m. ET and the official cast will be announced on September 8.

Would you be excited to see Dancing With the Stars come to Disney California Adventure Park? Let us know in the comments!