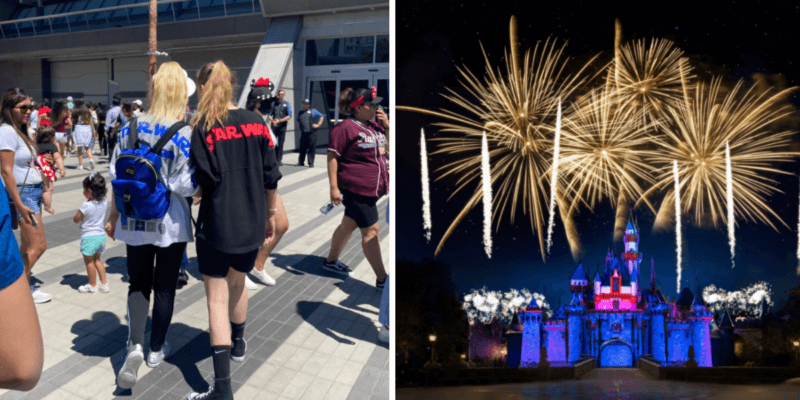 Disney’s theme parks are renowned for their ultimate Guest experiences. Ranging from stellar dining to thrilling rides, the Disney Parks can cater to pretty much anyone. The iconic destinations are also hotspots for celebrities to enjoy the magic and soak in the Disney atmosphere.

Recently, Dance Moms star JoJo Siwa and her girlfriend Kylie Prew, enjoyed yet another day out at the original Magic Kingdom, Disneyland Resort in California, and this time they arrived in matching sweatshirts.

JoJo Siwa rose to popularity on Lifetime’s Dance Moms along with her mother, Jessalynn Siwa. The dancer also has a huge following online with over 12 million subscribers on her YouTube channel and is known for her hit singles like “Boomerang”. It’s safe to say that Siwa is one of the most popular and recognizable talents in the entertainment industry today. This also means that a day out to one of the world’s leading theme parks doesn’t often go undetected especially in a world run on social media.

Disneyland Resort in Anaheim, California recently welcomed the JoJo bows creator and her girlfriend Kylie Prew, for a day of fun and love.

Twitter user, @army36_bts, shared a selection of photos of the couple enjoying a romantic time at the Disneyland Resort.

The two can be seen riding attractions, sharing food, and embracing each other all the while wearing a set of matching Star Wars sweatshirts. Siwa dons an R2-D2 inspired number while Prew is one with the dark side, dressed in a Darth Vader version of the same shirt — in fact, Prew’s shirt has been seen before when the couple enjoyed a date night across the continent at the Walt Disney World Resort.

Matching outfits are one of the most seen things, at least in terms of outfits, while vacationing at any Disney Resort. While they may pull a few grumbles from some Guests, this matching Star Wars set is pretty cool. So eye-catching in fact, that some fans managed to grab photos with the star.

@army36_bts got a photo with Siwa while at the Disney Resort.

This fan who goes by carmen (@benplattie) managed to take a shot of the couple while they were experiencing the new Avengers Campus at Disneyland California Adventure.

Seeing the YouTube star at Disneyland is sure to be a highlight to most Siwa fans. Back in May, fans swarmed Siwa at the Universal Orlando Resort, when she, Prew, and Siwa’s family were visiting the iconic theme park. Siwa’s appearance at Universal pretty much shut down CityWalk as fans clamored to get photos of the singer.

The support Siwa received from her fans when she publicly came out as part of the LGBTQ+ community in January 2021 is fantastic to see. At first, the YouTube sensation did not want to label her sexuality but has since gone on to suggest she may be pansexual. She revealed Prew had asked her to be her girlfriend a month before she came out, and the two have been together ever since.

If there’s one place to celebrate your love for each other, it is certainly at Disney and what better than quality time spent at this famous California theme park.

Do you like to visit a Disney Park with your significant other? Let us know in the comments!