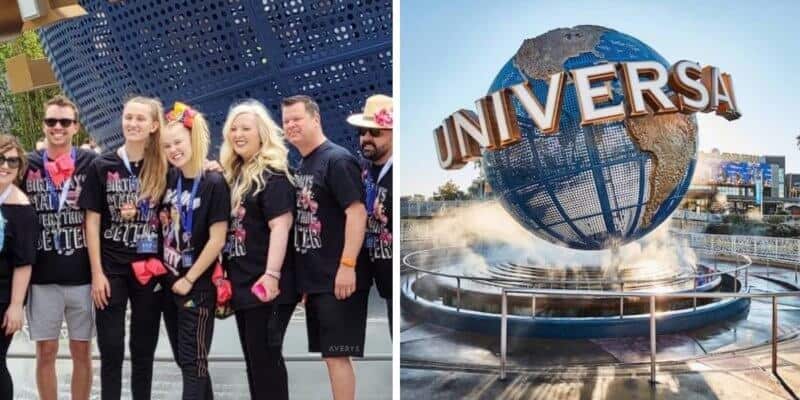 Lately, it seems that a lot more celebrities are hitting up the theme parks, from Disney to Universal; everyone wants to be immersed in the thrilling magic that both theme parks possess.

It is no surprise to hear that celebrities love to visit Disney World, including Neil Patrick Harris, John Stamos, and Paris Hilton — Disney has its fair share of celebrities who endorse their theme parks. Even Justin Bieber recently took a trip to Universal Hollywood with his wife Hailey Bieber!

Recently, we have seen that Dance Moms and YouTube star JoJo Siwa has spent a lot of time in Orlando with her family and her girlfriend, Kylie Prew. We previously reported that JoJo took Kylie on a Disney World date as the two enjoyed fun photos in front of Cinderella Castle and then got soaked on Splash Mountain. Now, we saw that JoJo has been hanging out at Universal Orlando Resort.

On our way into CityWalk on May 19, we saw a hoard of people leaving the park. The group was very loud and cheering. After a closer look, it was obvious that the group was following JoJo Siwa, Kylie Prew, and the rest of JoJo’s family as they were leaving Universal for the day. JoJo was rocking her classic blonde side pony with a beaming smile after having a fun-filled day at the theme park.

The large group of fans behind her continued to scream JoJo as she walked towards the valet parking lot, which has been closed during the pandemic but clearly, could be used for special reasons that could provide safety and security to high-profile Guests.

Although the crowd swarmed JoJo quicker than we could pull out a camera on the moving walkway, Instagram user avery_siwanator posted a photo of JoJo with the family from earlier that day! JoJo’s birthday was yesterday, so it seems that she was celebrating with her family at Universal. The crew wore matching tops that read “Birthdays make everything better.”

JoJo Siwa recently came out saying she is part of the LGBTQ+ community and has since publically showcased girlfriend Kylie Prew whenever the two are together and having a fun time. It seems that the couple truly loves the theme parks, so it will be fun to see which park they hit up next.

What celebrities have you seen at the Disney Parks? Let us know in the comments below!