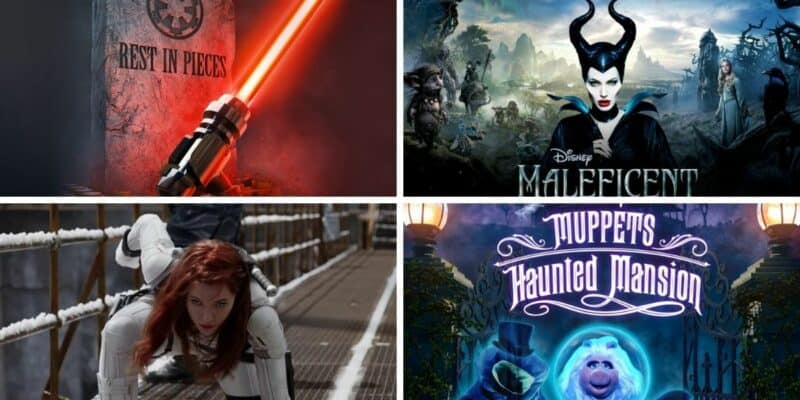 In just a couple of weeks, spooky season will be upon us — although we wouldn’t judge if you’ve already started celebrating. Disney+ is adding a ton of movies and television shows, a lot of which can help you celebrate the Halloween season.

Let’s take a look at all of the movies and television shows coming to Disney+ in October.

What a perfect way to kick off Halloween! This new LEGO Star Wars movie will focus on Poe Dameron and his droid pal BB-8. Here is more information about the fun movie from What’s On Disney+.

After the events of “The Rise of Skywalker,” Poe and BB-8 must make an emergency landing on the volcanic planet Mustafar where they meet the greedy and conniving Graballa the Hutt who has purchased Darth Vader’s castle and is renovating it into the galaxy’s first all-inclusive Sith-inspired luxury hotel. While waiting for his X-Wing to be repaired, Poe, BB-8, Graballa, and Dean (a plucky and courageous young boy who works as Graballa’s mechanic) venture deep into the mysterious castle with Vader’s loyal servant, Vaneé.  Along the way, Vaneé shares three creepy stories linked to ancient artifacts and iconic villains from across all eras of Star Wars. As Vaneé spins his tales and lures our heroes deeper into the shadowy underbelly of the castle, a sinister plan emerges. With the help of Dean, Poe and BB-8 will have to face their fears, stop an ancient evil from rising, and escape to make it back to their friends.

Even though the Angelina Jolie villain origin story came out in 2014, it is just now finally making its way to Disney+.

Explore the untold story of Disney’s most iconic villain in this wickedly fun twist on the classic Sleeping Beauty. In an unforgiving mood after a neighboring kingdom threatens her forest, Maleficent (Angelina Jolie) places an irrevocable curse on the king’s newborn daughter, the Princess Aurora. But as the child grows, Maleficent finds herself becoming fond of the girl. And as the conflict between the two realms intensifies, Maleficent realizes that Aurora may hold the key to peace in the land.

While Black Widow has technically been on Disney+ since its July 9 release, it has only been available with Premier Access, so subscribers have had to pay an extra $29.99 to watch the Marvel movie. However, starting on October 6, Black Widow will be available to all Disney+ subscribers for no extra fee.

A six-part docuseries with fly on the wall access into the wider world of NASA, with cameras on Earth and in space. NASA astronaut Captain Chris Cassidy is on a quest to get back in his spacesuit for one last mission. This series follows Chris and the wider team who take on missions that risk life, limb and reputation for the greater good of humankind. Join them as their missions unfold.

A follow-up to the 1989 Tom Hanks film, the Disney+ show follows the son of Hanks’ Scott Turner. Turner & Hooch first premiered in July and will be wrapping up its first season on October 6.

Marvel’s What If…? – Season Finale

“What If…?” flips the script on the MCU, reimagining famous events from the films in unexpected ways. Marvel Studios’ first animated series focuses on different heroes from the MCU, featuring a voice cast that includes a host of stars who reprise their roles.

Set in modern-day Hawai‘i, “Doogie Kamealoha, M.D.” – a coming-of-age dramedy inspired by the hit medical series “Doogie Howser, M.D.” – follows Lahela “Doogie” Kamealoha, a 16-year-old prodigy juggling a budding medical career and life as a teenager. With the support of her caring and comical ‘ohana (family) and friends, Lahela is determined to make the most of her teenage years and forge her own path. Guiding Lahela (and also complicating things) is her career-driven mother Dr. Clara Hannon who’s also her supervisor at the hospital, her doting father Benny who helps keep her connected to what matters most, her free-spirited older brother Kai, her gregarious younger brother Brian Patrick, her best friend Steph, her surfer crush Walter and her fellow hospital colleagues, Dr. Lee, Charles and Noelani.

Combining popular characters from The Muppets and one of the most popular attractions in Disney history, Muppets Haunted Mansion will include a star-studded cast that will bring the Haunted Mansion into a new — and hilarious — light.

The Great Gonzo – world famous daredevil artiste, has done it all, seen it all, and survived it all. But on Halloween night, the fearless Gonzo takes on the greatest challenge of his life by spending one very daring night in the most grim grinning place on Earth …The Haunted Mansion. Inspired by all four of the iconic Disney Haunted Mansion attractions located across the globe at various Disney Parks, the “Muppets Haunted Mansion” includes many hidden easter eggs for Disney fans and “Muppet-ized” sets and props that help immerse viewers in the storytelling experience. This marks the Muppets’ first-ever Halloween special and features three new original songs, “Rest In Peace,” “Life Hereafter” and “Tie The Knot Tango”, a star-studded Muppets cast, celebrity cameos, and spooky fun for families to enjoy together.

The re-imagined story takes place a few days before Halloween when 12-year-old friends Gilbert, Marshall and Amy accidentally revive a mummy they discover in a neighbor’s basement, which they affectionately name Harold. However, they must rush to return him to his resting place before midnight on Halloween. Along the way, the team narrowly escapes a nefarious group of criminals intent on selling the mummy to the highest bidder. When Harold is inevitably captured, Marshall, Gilbert and Amy must band together to stand up to the criminals, face their fears and rescue their new—but rather “ancient”—friend.”

Just Beyond – All episodes

Inspired by the writings of R.L. Stine, “Just Beyond” is an eight-episode anthology series that tells astonishing and thought-provoking stories of a reality just beyond the one we know. Each episode introduces viewers to a new cast of characters who must go on a surprising journey of self-discovery in a supernatural world of witches, aliens, ghosts and parallel universes. Stine, prolific author of young-adult horror fiction, including the “Goosebumps” and “Fear Street” series, has been scaring readers worldwide for over 35 years. The show’s creators referenced his popular page-turners while developing their new series of hair-raising stories. Episodes acknowledge teenage struggles, such as bullying, peer pressure and anxiety, through supernatural storylines that will keep viewers on the edge of their seats.

Inspired by the 1987 true story, “McFarland, USA” follows novice runners from McFarland, an economically challenged town in California’s farm-rich Central Valley, as they give their all to build a cross-country team under the direction of Coach Jim White (Kevin Costner), a newcomer to their predominantly Latino high school. Coach White and the McFarland students have a lot to learn about each other but when White starts to realize the boys’ exceptional running ability, things begin to change. Soon something beyond their physical gifts becomes apparent—the power of family relationships, their unwavering commitment to one another and their incredible work ethic. With grit and determination, the unlikely band of runners eventually overcomes the odds to forge not only a championship cross-country team but an enduring legacy as well. Along the way, Coach White realizes that his family finally found a place to call home and both he and his team achieve their own kind of American dream.

Inside the Magic will update this list if Disney reveals any more films and television series that are coming to Disney+ next month.

What movie or television show are you looking forward to watching in October on Disney+.