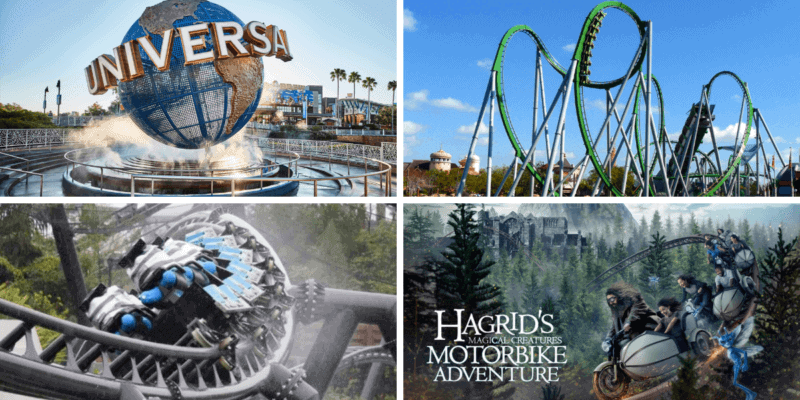 When it comes to theme parks, Central Florida ranks supreme. Not only is it home to both Walt Disney World and Sea World, but it is also home to another theme park known for its thrill rides — the Universal Orlando Resort — which consists of Universal Studios, Islands of Adventure, and Volcano Bay.

Universal Orlando Resort has a number of exciting roller coasters, including the new Jurassic World: VelociCoaster and The Incredible Hulk Coaster. Universal Studios and Islands of Adventure are also home to the Wizarding World of Harry Potter and connected to each other by an actual Hogwarts Express.

Universal Orlando certainly has numerous thrill rides to experience, of course, that’s only if you can fit on them. Unfortunately, many of those thrill rides are unable to cater to larger Guests — including those who may not appear to be all that large.

According to the Universal Orlando website, the following rides may not be able to accommodate Guests whose waistlines are 40 inches or more:

While 40 inches may seem like a larger number, it is actually the size of the average man. According to Healthline, the average waistline of men 20 years and older is 40.2 inches. That number increases for men 40 to 59 years old and typically goes back down for men 60 and older.

Now, many may think, “Well, of course, Universal rides have to be that way. They have loops and drops, and you have to make sure people are strapped in safely”. That is true, HOWEVER, Disney theme parks in the States also have a number of thrill rides  — and although it is less than the number of thrill rides at Universal, their restrictions don’t seem as exclusionary.

Disney World has several exciting thrill rides, including Rock n’ Roller Coaster, Space Mountain, and The Twilight Zone Tower of Terror. Disneyland Resort in California also has the Matterhorn, and the Incredicoaster, which has a loop and is able to accommodate larger Guests.

Disney has proven that roller coasters can have loops and be fast and exciting, but also not be incredibly restrictive. That begs the question — Why does Universal Studios make their rides so small?

The further problem with Universal rides is that losing weight does not necessarily mean that you will fit on them. The waistline restrictions lead to further restrictions when it comes to how broad a person is in general. There are a number of Guests who could lose all the weight in the world, but their proportions are broad – whether it be in the hips, or in the shoulders – and because of those proportions will just not fit.

Guests who are also taller may struggle to fit on the rides. This writer is close to someone who is 6’5’’ and is broad-shouldered, a very athletic build. No matter how much weight he loses, his height and shoulders will not allow him on a majority of thrill rides.

Several roller coasters at Universal Orlando require Guests to not only pull down a restraint but then also pull up a seatbelt – which for tall people is a huge problem as the restraint does not come down far enough for the seatbelt to reach. Harry Potter and the Forbidden Journey put Guests in a box-shaped chair, which he is too tall to ride in, and no amount of slouching will allow him to fit.

That same family member has been to Disney World numerous times and has never struggled to fit on one thrill ride. In fact, the thrill rides are his favorite, including Tower of Terror and Rock n’ Roller Coaster.

When Guests are paying more than $100 to get into the Universal Orlando theme parks for the day, it is very disheartening to see the large number of rides that are exclusionary to a number of people.

When it comes to thrill rides, Universal Studios may have the one up on Disney. However, and this is a big however when it comes to accessibility to rides, Disney is absolutely crushing Universal. It is really something that Universal should really consider when building future attractions.

Do you think that Universal is too exclusionary on too many of their rides? Let us know in the comments!