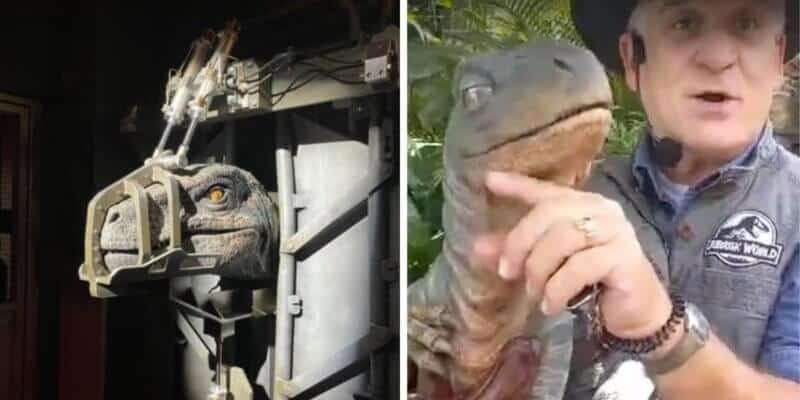 Now that Jurassic World VelociCoaster about to fully have its grand opening on June 10, the hunt truly is on!

Universal’s Jurassic coaster at Islands of Adventure has softly opened to rave reviews, and it seems that everyone wants more of the raptors. At the moment, the attraction showcases four raptors that riders may recognize from the films. Riders will encounter Charlie, Blue, Delta, and Echo when they ride in the raptor paddock attraction, and it seems that there could be more dinosaurs to come in the future.

Inside the Magic joined Universal Orlando Resort for their media day showcasing Jurassic World VelociCoaster, and we got to meet an entirely new baby raptor named Sierra!

Sierra was with one of the raptor experts at InGen and is part of the Raptor Inclusion Program, which is a program set up by InGen to help introduce the raptors to humanity. By doing this, it helps create a much safer relationship between humans and the carnivorous creatures.

The raptor expert let us know that Sierra is fed every 15 minutes to keep her full and not to look towards humans for food. When we asked if Sierra would ever grow up big enough to join her other raptors in the VelociCoaster paddock so that Guests could ride alongside her, the raptor expert let us know that that was likely going to be in her future!

If you want to check out the full interview, take a look at the Instagram post that we shared below!

Meet Sierra, one of the baby raptors InGen is raising to one day join the VelociCoaster raptor paddock!

We hope to see more of the raptor experts in the Jurassic Park section of Islands of Adventure, as it allows the feeling and immersion of InGen to really seep in.

It would be interesting to see VelociCoaster evolve with the films and as a functioning theme park attraction in the world of Jurassic World. As time progresses, more dinosaurs like Sierra could potentially be introduced; however, that idea is purely speculation at this point.

For now, Universal Guests can ride the attraction and meet four raptors, or they can head over to Raptor Encounter, where they can meet another new raptor named Bravo!

Would you like to see even more raptors added to VelociCoaster in the future? Or do you prefer having the four main dinos as the attraction highlight? Let us know in the comments below!