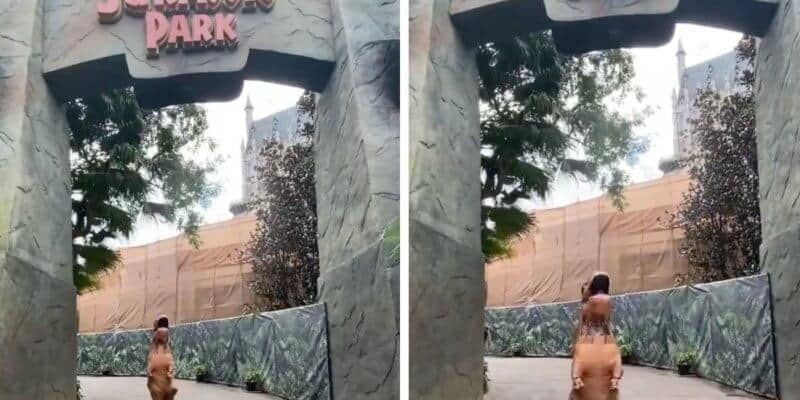 Universal Orlando Resort has been heavily pushing the Jurassic Park section of their Islands of Adventure theme park. It seems like the dino-fun is only continuing on their social media page.

With Jurassic World VelociCoaster now officially open, Universal Orlando Resort has given their Jurassic section a new resurgence of life by including an intense thrill coaster with spectacular theming throughout. The Jurassic Park area has also reinstated their T-rex photo-ops, allowing Guests to get the perfect almost-eaten-by-a-dino-but-lived-to-tell-the-tale photo.

Now, it looks like a T-rex was set on the loose in the theme park, but it may not be as terrifying as the dinosaur you see on Jurassic Park River Adventure. Universal Orlando Resort (@UniversalORL) recently Tweeted a video of someone in a blow-up dinosaur costume running through the land, and it looks hilariously awesome.

The Tweet credits Instagram user @adrianeraye, who was likely the one in the suit. While running through the Jurassic Park signage, we can see other Universal Guests take a double look at the runaway dinosaur; however, they are a little more shocked than terrified.

If you are ever at Universal Orlando Resort and want to meet a dinosaur, unfortunately, the one in the video above is likely not an option; however, you can meet a real-life raptor at the Raptor Encounter and get a very…. memorable photo experience.

What do you think of this running dinosaur? Let us know in the comments below!

If you want to see some real-life dinosaurs, why not plan a Universal vacation? Click here to begin today!