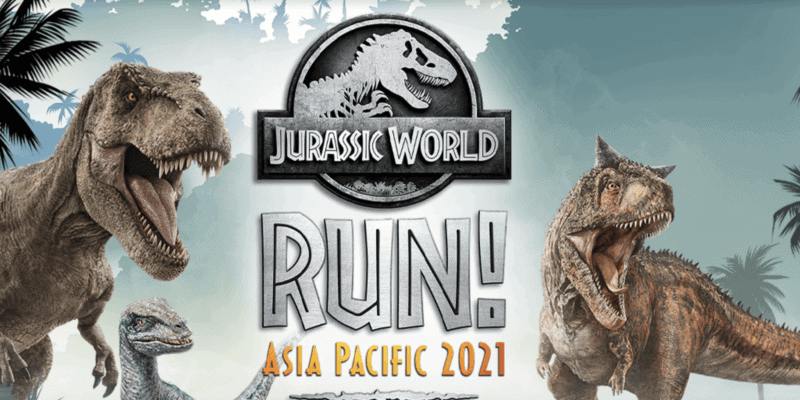 If there were one way to get me to start running, I would have to say that the idea of getting chased by a dinosaur would be one of them.

There are many theme park lovers who enjoy partaking in running events when they are themed. At Disney World, the runDisney events are incredibly popular and allow Guests to exercise in a fun environment that makes the sweat and exhaustion worth it.

On the other hand, Universal Orlando Resort may not have a running event, but a Jurassic-style virtual run will be taking place in Asia Pacific. According to the Taiwan News, the first-ever Jurassic World running experience will occur shortly, called The Jurassic World RUN!. The run is said to be highly immersive for participants and will feature the same dinosaurs Jurassic-lovers saw on screen, with the goal of surviving an Indominus Rex.

The first-ever Jurassic World virtual run offers each participant a unique immersive experience where runners need to run their best to escape Isla Nublar. Runners are required to download and use the MOVE by LIV3LY app in order to unlock and access the exciting augmented reality experiences that will enhance their journeys. As they work to complete their registered distances of 5km, 10km or 21km, runners will unlock successive milestones of assistance in their journey to escape from Isla Nublar. Each milestone that they unlock will bring them deeper into the adventure and closer to the virtual finish line! The MOVE app will bring the thrills and awe of Jurassic World to life through augmented reality that can be experienced anywhere and anytime; even right in their own neighbourhoods!

Lately, we have seen the love for Jurassic World grow immensely through the Universal theme parks. Universal Orlando Resort just added the incredible VelociCoaster to Islands of Adventure. Universal Beijing will bring Isla Nublar to life, and Universal Studios Hollywood refurbished their Jurassic Park attraction to become a Jurassic World ride. Knowing how successful Jurassic World-themed attractions have been for fans of the franchise, it seems that this run will likely do the same.

Participants can start clocking in their times and distances from 26th July 2021 – 30th September 2021 and receive a t-shirt to complete the run. It would be interesting to see if Universal would ever consider hosting a themed theme park run that allowed Guests actually to run through a Jurassic environment.

Would you participate in a Jurassic World run at Universal if one was ever created?