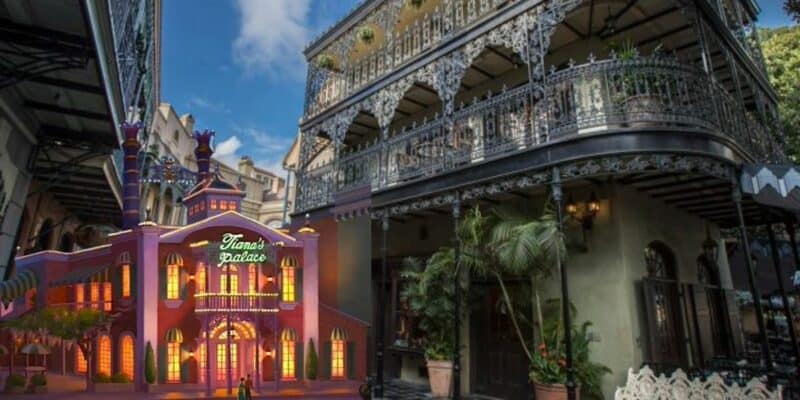 Back in the summer of 2020, Disney announced that it would be retheming the popular Splash Mountain attraction at both Disneyland and Walt Disney World. Both attractions would be getting a remake to be themed after the popular 2009 Walt Disney Animation Studios film The Princess and the Frog. Disney has also shared some artist renderings of just what the new attraction will look like.

At Walt Disney World, Splash Mountain is located in Frontierland at Magic Kingdom Park. At Disneyland, Splash Mountain is found in Critter Country, which is right next to New Orleans Square, meaning that the new Princess and the Frog attraction will really fit in seamlessly.

It seems that in order to prepare for the new attraction — which does not yet have an opening date at this time — Disneyland could be doing some work in New Orleans Square. Back in May, Inside the Magic reported that the dress shop, Le Bat en Rouge, found in New Orleans Square had closed, and the store looked like it was getting some sort of Princess and the Frog retheme. The signs on the shop said “Something NEW is cooking!” and were themed to Princess and the Frog colors.

Well, that was just the beginning! Now, scaffolding is up all over New Orleans Square and work being done to the area is well underway. One building, in particular, is drawing a bit of attention. Instagram user Five Fires YouTube shared scaffolding on one building (the former Le Bat en Rouge location, pictured above with the aforementioned signs) that went up extremely high, and it is leaving many fans wondering if they will finally get the Tiana’s Palace restaurant that they have been hoping for.

Some fans speculated that the building is being transformed into an area where Guests will be able to see artwork and plans for everything that is coming with the Princess and the Frog retheme to Splash Mountain — much like the Blue Sky Cellar that can be found at Disney California Adventure Park, which displayed plans for the Pixar Pier retheme of Paradise Pier to get Guests excited for the 2018 opening of that area of the Park. However, that does not account for why the scaffolding is so high.

Disney has not confirmed any new restaurant or shopping experience that may be coming to New Orleans Square. There is no word on how long the scaffolding will be up or when Disneyland Guests can expect the area to be complete.

Are you hoping to see Tiana’s Palace come to Disneyland? What do you think this location in New Orleans Square might become? Let us know in the comments!