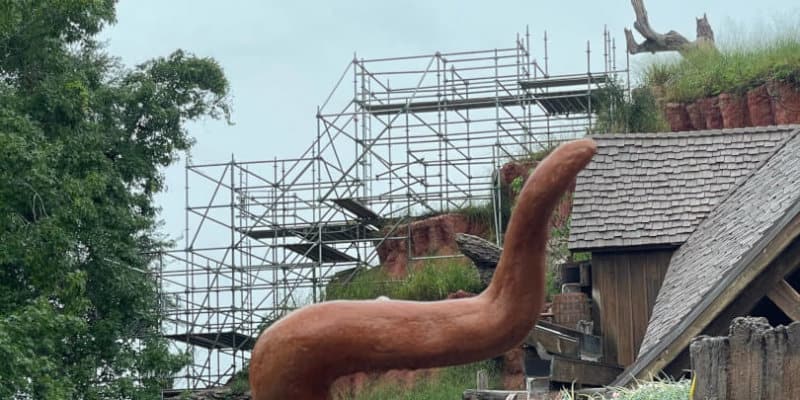 The ride, which is currently themed to Song of the South (1946), will be transformed to include Princess Tiana, Prince Naveen, Louis the Alligator, Ray the Lightning Bug, and other characters from The Princess and the Frog (2009).

Now, Walt Disney World Resort officials have begun prepping the fan-favorite ride for its transformation. As you can see in the photos below, scaffolding has been erected at the Frontierland ride, presumably signaling the start of the Princess and the Frog retheme sooner rather than later!

Even from a bit of a distance, the construction preparations can be seen.

When Disney announced the Splash Mountain retheme, the company issued a statement that read, in part:

The voice of Princess Tiana and Tony Award-winning actress, Anika Noni Rose, also weighed in when the retheme was confirmed. She stated:

“It is really exciting to know that Princess Tiana’s presence in both Disneyland and Magic Kingdom will finally be fully realized! As passionate as I am about what we created, I know the fans are going to be over the moon. The Imagineers are giving us ‘The Princess and the Frog’ Mardi Gras celebration we’ve been waiting for, and I’m here for it!”

At this time, Disney has not announced an official timeline for the Splash Mountain retheme, so it is not known when — or for how long — the ride will close.

It is also imperative to note that Disney has not officially confirmed the scaffolding is for the retheme project. It could also have to do with general maintenance, updates ahead of Walt Disney World Resort’s 50th anniversary, or some type of necessary repair.

What do you think about the Splash Mountain retheme seemingly getting underway?