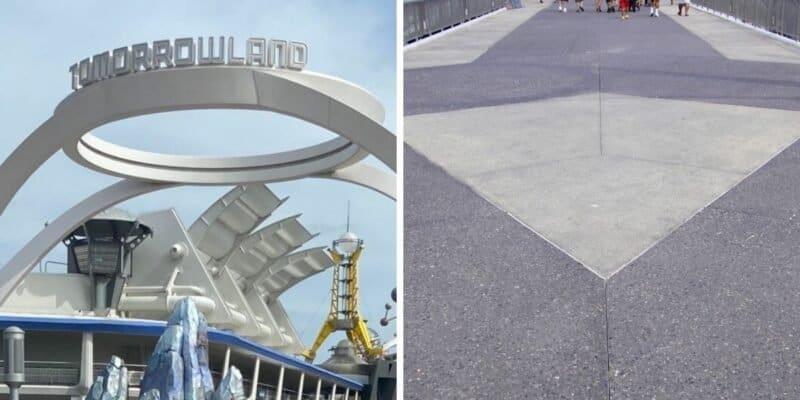 Disney Imagineers are working hard to prep the Walt Disney World theme parks for the 50th anniversary celebration, which will kick off on October 1, 2021. And one of the construction projects we have been following along with is the update happening within Tomorrowland at Magic Kingdom.

Tomorrowland has been receiving a complete repave as Imagineers are ensuring the land is in its best shape before the celebrations kick off. Now, one of the most iconic elements of Tomorrowland is officially gone as the repaving continues on the Magic Kingdom land.

In case you haven’t been following along, the iconic gear-themed pavement is being ripped up and replaced with a smoother, dark pavement. Now, as Imagineers continue to repave the land, that Tomorrowland gear is officially gone.

Bioreconstruct took to Twitter to share a recent photo of the pavement in Tomorrowland, in which you can see the gear is officially ripped up and replaced:

New pavement at the Tomorrowland bridge. Used to have gear design.

New pavement at the Tomorrowland bridge. Used to have gear design. pic.twitter.com/CkCBtpEP1U

Tomorrowland is not the only section to receive an update ahead of the 50th anniversary. In fact, Disney Imagineers also completed work on attractions including Prince Charming Regal Carrousel, Peter Pan’s Flight, Dumbo the Flying Elephant, and others, so they are in tip-top shape for the 50th.

And we can’t forget about the Tangled area of Magic Kingdom and how it recently received some tender loving care as well, which you can read more about here.

Are you excited to see the gear pavement being replaced in Tomorrowland or are you upset? Let us know in the comments below.