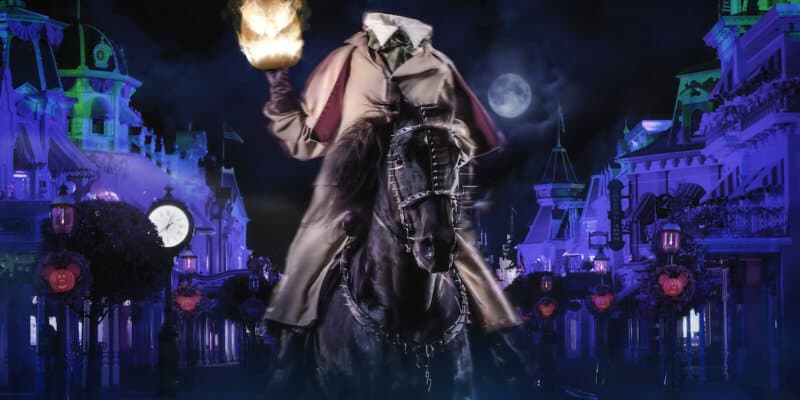 Additionally, even though Magic Kingdom was in operation during the Halloween season in 2020, Mickey’s Not-So-Scary Halloween Party was canceled.

With all of this being said, it’s been two years since the Headless Horseman last made an appearance at both Walt Disney World Resort and Disneyland Resort as the last time he trotted down Main Street, U.S.A., was during the Halloween parties in 2019.

Now, with Disney After Hours Boo Bash kicking off tonight, and with Oogie Boogie Bash just around the corner, will the iconic character make a triumphant return? Here’s what we know.

Disney After Hours Boo Bash kicks off tonight, August 10, and many are wondering exactly what characters will make appearances. Luckily, we now know that select Disney characters, including Goofy, Chip and Dale, Foulfellow and Gideon, and more will be appearing throughout the event. We also know characters will make appearances in cavalcades including Mickey’s Happy Halloween Cavalcade, Disney Villain Halloween Cavalcade, Jack’s Nightmare Cavalcade, and more.

However, nowhere on the Disney World website — particularly on the official webpage for Disney After Hours Boo Bash — does it state that the Headless Horseman will be making an appearance. In fact, the only spot he can be “seen” in marketing materials is to persuade Guests to purchase Memory Maker, and that is because it is one of the PhotoPass Magic Shots offered during the After Hours event.

Therefore, it could mean that the Headless Horseman may not ride down Main Street, U.S.A., during Boo Bash since he is not listed anywhere on the Walt Disney World website. But Inside the Magic will update you as we get more information regarding the After Hours event.

In regards to Oogie Boogie Bash, Guests should likely be able to still see the Headless Horseman at Disney California Adventure as Disneyland Resort confirmed the Frightfully Fun Parade will be part of the Halloween party again this year. Though the website doesn’t mention the Headless Horseman specifically, we know that in the past he was part of this parade and so we suspect him to return to Oogie Boogie Bash later this year.

Again, Inside the Magic will update you as we get more information regarding the Headless Horseman at the Disney Parks.

Do you hope to see the Headless Horseman return to Disney World for Boo Bash? Let us know in the comments below.