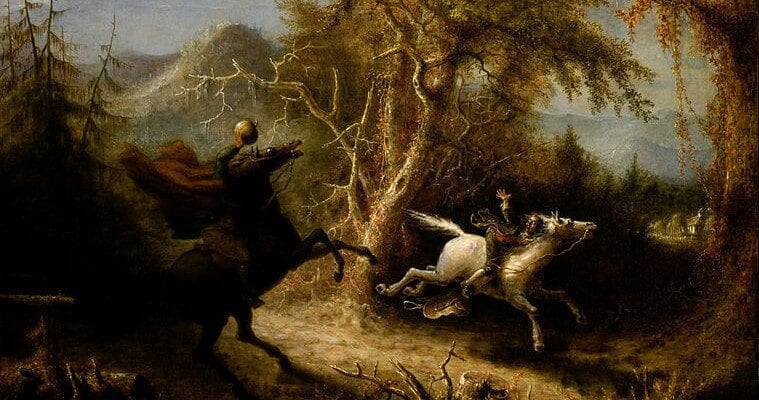 Irish, Scottish, and German folklore all tell the tale of a headless horseman terrorizing town folk. In India, the character is seen as a protective hero. American tales of the same character owe their existence to Washington Irving’s 1820 story, The Legend of Sleepy Hollow. This decapitated Hessian mercenary of the Revolutionary War battles returns on All Hallow’s Eve in search of his missing head.

The dark rider has been richly depicted in various incarnations and featured in Halloween specials through the years.  In an episode of Kolchak the Nightstalker, his horse was swapped for a motorcycle. Numerous motion pictures have depicted the decapitated one, including a 1979 film starring Jeff Goldblum and the Tim Burton adaptation featuring Johnny Depp as Ichabod Crane and Christopher Walken as the rider. The haunting Hessian and his nemesis have an animated presence as well: In the 2015 Halloween special, The Smurfs and the Legend of Smurfy Hollow, for example. 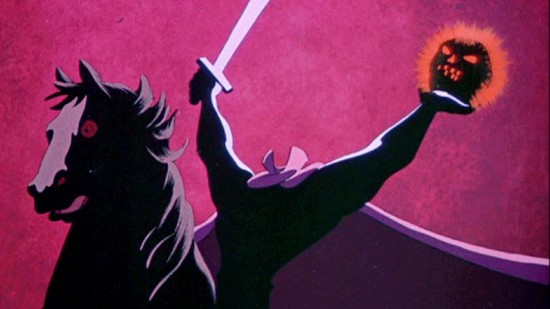 Perhaps the most infamous incarnation of this folk tale is the 1949 Bing Crosby-narrated Walt Disney cartoon short The Legend of Sleepy Hollow (which also brought us the beloved tale of Mr. Toad).  This classic creepy cartoon features schoolmaster Ichabod Crane dropping in at the Van Tassel home for a Halloween party. Bram Bones recites the tale of the malevolent master of horsemanship’s thirst for a new head. The terrorizing ‘toon spun off a couple of vinyl recordings of the show along with a 1963 deliciously dark cover of the title tune sung by Thurl “Tony the Tiger” Ravenscroft (that little 45 rpm record used to terrify toddler me and remains a fiendish fall favorite to this day).

The continued success of the 1949 classic cartoon is celebrated at the Magic Kingdom with the “Sleepy Hollow Refreshments” counter just inside Liberty Square. Bram, Ichabod, and the Headless Horseman were featured for several years as part of the Fort Wilderness haunted hayride each Halloween season. The hayride, sadly, seems to have vanished, but the haunted Hessian manages to materialize at Mickey’s Halloween party, galloping through the Park each night of the eerie event. 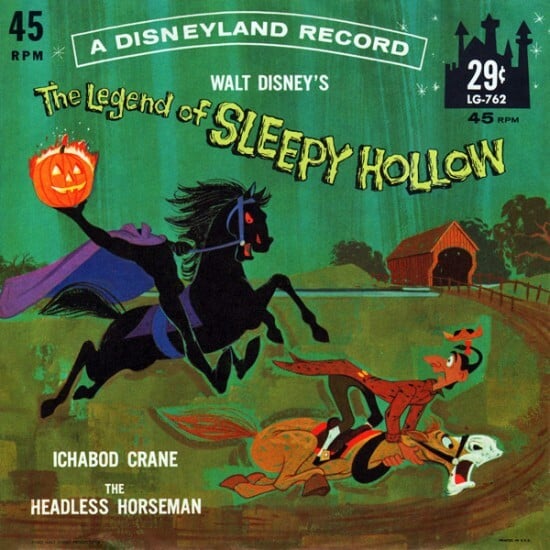 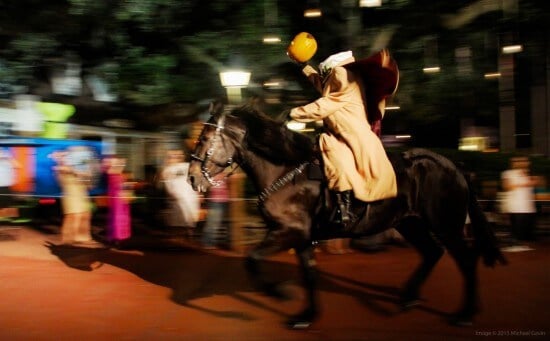 Which incarnation of this headless rider terrorizes you the most?  Spin your tale in the comments below.