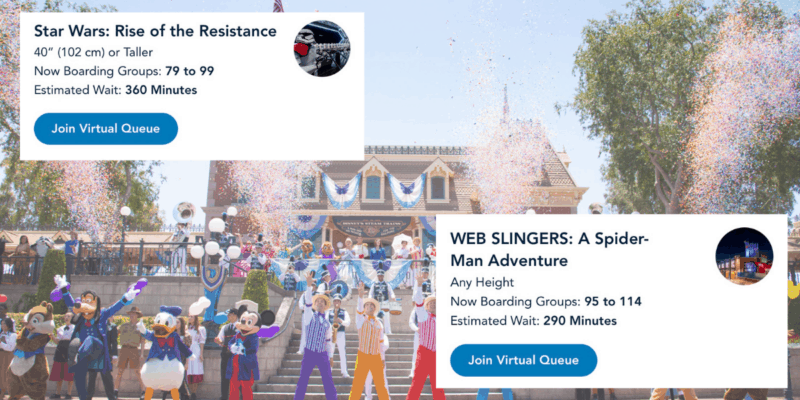 Often, the summer season can mean crowded theme park days. But lately, we’re seeing the opposite! It’s the end of August, and as kids are heading back to school and the Halloween Time season hasn’t yet begun, Disneyland and Disney California Adventure are hardly crowded at all.

But what does that mean for Disneyland boarding groups and the virtual queue system? Keep reading to find out!

Lately, we’ve noticed that meandering the Disneyland Resort theme parks has been a breeze, with low wait times persisting throughout the week. And today, we are seeing yet another example of lower Park crowds. It is very easy to get a boarding group for each of the most popular Disneyland Resort attractions this afternoon!

Currently, two attractions at Disneyland Resort consistently utilize the virtual queue system that requires Guests to obtain a boarding group in order to ride — Star Wars: Rise of the Resistance at Star Wars: Galaxy’s Edge at Disneyland Park and WEB-SLINGERS: A Spider-Man Adventure at Avengers Campus at Disney California Adventure Park. There are two distribution times for boarding groups: 7 a.m., before the Parks open for the day, and 12 p.m.

At the time of this articles publication at around 1:15 p.m. PST, boarding groups are still available and you can still join the virtual queue for each of these attractions. Magic Key Holders, what are you waiting for?!

It appears that not only are these attractions running relatively smoothly, but also the crowds are much lower right now. Plus, with Annual Passes finally back — they have been reimagined and are now called Magic Key Passes — as of this week, we are seeing a lot more Annual Passholders — not called Magic Key Holders) come and go to and from the Parks.

Many locals and Magic Key Holders now know that they can head to the theme parks whenever they want. Perhaps right now, with school back in session and with Magic Keys available, there aren’t as many Guests purchasing single-day or multi-day tickets and crowding the Parks.

Overall, we’ve seen wait times that are quite low and incredibly manageable, boarding groups easier to access, and the Parks not overwhelmingly crowded at all. It’s making for an enjoyable and magical Disneyland Resort experience!

Have you been to Disneyland Resort recently and experienced low crowds? Let us know in the comments!

Comments Off on Low Summer Crowds Continue at Disney Parks: Getting a Boarding Group Is Easy!