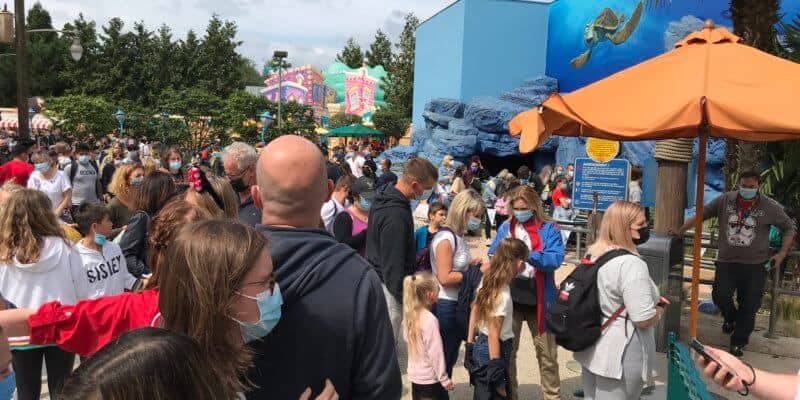 Disneyland Paris has recently announced that their FastPass system would be changing to a new pay-per-ride system.

On July 6, it was revealed that Disneyland Paris is getting rid of its free FastPass system and implementing a new paid system called Premier Access this summer. As we reported, Disneyland Paris’ Premier Access system will charge Guests around €8, which is just over $9 per ride at the theme park, and only select rides will be available under this service.

To help mitigate the crowds in stand-by lines the Resort implemented Standby Pass. Standby Pass is a free system used on busy park days that allows Guests to select a return time for certain attractions to ride.

The purpose of Standby Pass is to ensure that busy attractions do not experience heavy crowding; however, it seems that now that Disneyland Paris has reopened, the system is not working exactly as expected.

Twitter user PixieDust (@Pixiedust_be) posted a few photos of heavy crowding in front of popular Disneyland Paris attractions such as Crush’s Coaster Ride, all due to Standby Pass “drama”.

From the looks of it, it seems that return times for the Standby Pass can, at times, cause more crowding than a regular queue as Cast Members must verify each Guest’s Pass on their app.

The comments on the Tweet’s thread also indicate that this instance may not be a one-time issue, and Guests do not like the new system.

Euro Disneyland Imagineering (@E_D_L_I) is confused on how this is solving the crowd issue, as it is creating more crowds.

Standby Pass is a mistake.

Standby Pass is a mistake.

Disney and Beyond (@DisneyBeyond1) is not in any rush to return to the parks after seeing photos and operational changes like this.

I miss the parks so much, but with scenes like that, and the lack of distancing to keep lines short, I’m in no hurry to get back.

I miss the parks so much, but with scenes like that, and the lack of distancing to keep lines short, I'm in no hurry to get back. ☹️☹️

To minimise the time you spend in the queue during certain periods of the day and to ensure safe physical distancing, you will need to reserve a Standby Pass to enjoy some of our most popular attractions. It’s easy, it’s free and it helps you enjoy more time exploring the Disney Parks!

What is a Standby Pass?
The new Standby Pass is a free service, available via the official Disneyland Paris app. During certain periods of the day, you will need to reserve a Standby Pass to be able to join the queue for some of our most popular attractions during a specific allocated 30-minute time slot (subject to availability).

It will be interesting to see how the new Premier Access paid system will work this summer, seeing how Standby Pass is facing crowd issues.

What do you think of the Standby Pass? Let us know in the comments below.