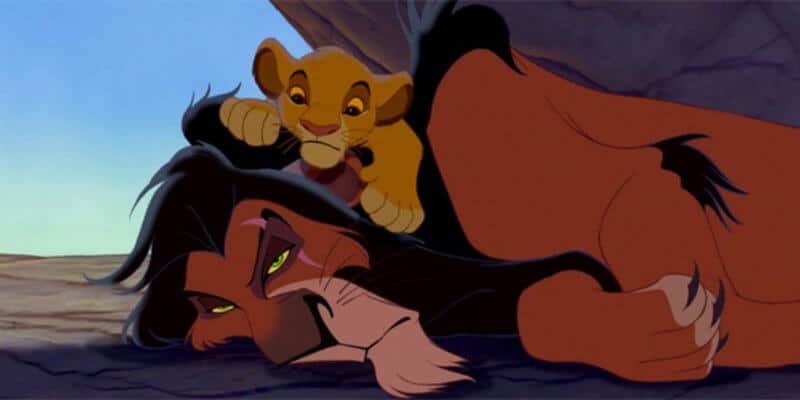 The Lion King is a Disney animated classic that tells the story of a young lion cub, learning to take his father’s place as king. Although, as many of you know, the 1994 animated film goes much deeper than that as Simba loses his father due to his uncle’s wrongdoing.

Well, what if I told you that if it weren’t for Scar’s brutal murder, Simba may have ended up being just as evil as his uncle? That is exactly what one fan theory suggests.

Related: The Real Simba From ‘The Lion King’ is at Disney World

One Reddit user took to the platform to share their Lion King theory, suggesting that if it weren’t for Mufasa’s death, Simba may have ended up being just like his uncle.

The theory explains that at the start of the film, we already see Simba acting self-absorbed and spoiled, and as the Reddit user said, Simba has “an inferiority complex about living in his father’s shadow, and it likely would have gotten worse as he grew older”.

Additionally, before Simba grows older, when he is still a cub, we see how he treats Zazu, who is supposed to be his teacher. Simba should treat him with respect; however, it is clear he doesn’t respect Zazu and arrogantly brushes him off. As the Reddit user puts it, “Basically, we have all the elements to indicate Simba would grow up to be an entitled spoiled bully.”

So, what changed the path for Simba? Why didn’t he end up being just like Scar? Well, the shocking death of his father altered his mindset and basically put him in place. Per the Reddit theory:

It wasn’t until the shock of his father’s death and exile left him vulnerable and humiliated that he had any reason to listen to anyone. He was pretty much at the mercy of Timon and Pumbaa’s kindness. Not that they would have eaten him, but he had no idea how to survive on his own. Without them, he would have starved to death at his age.

It wasn’t his father’s influence that taught him to respect others or the natural cycle. It was literally getting thrown off his pedestal by his uncle and being forced to subsist on bugs and rely on the protection of prey that put him in his place.

Overall, this theory does make some excellent points. It is clear in the beginning of the film that we see Simba being disrespectful toward Zazu and showing his selfish side, as he didn’t listen to his father’s orders and continued to go off on his own, thinking he was already king. Though, this could be argued that he was just a cub at the time. Kids tend to act out at times as they think they are adults and want more responsibility than they have. It’s a part of growing up.

So, would Simba have ended up like Scar if Mufasa’s death didn’t turn his life upside down? It’s hard to say, but it is a possibility.

More on The Lion King

The 1994 Walt Disney Animation Studios film, The Lion King, is considered a classic to many and stars Johnathon Taylor Thomas as young Simba, Matthew Broderick as adult Simba, Nathan Lane as Timon, Ernie Sabella as Pumbaa, Jeremy Irons as Scar, and James Earl Jones as Mufasa.

Disney also remade the 1994 animated film into a live-action/CGI movie in 2019. If you have never seen the 2019 version, Disney describes it as:

Disney’s film journeys to the African savanna where a future king is born. Simba idolizes his father, King Mufasa, and takes to heart his own royal destiny. But not everyone in the kingdom celebrates the new cub’s arrival. Scar, Mufasa’s brother—and former heir to the throne—has plans of his own. The battle for Pride Rock is ravaged with betrayal, tragedy and drama, ultimately resulting in Simba’s exile. With help from a curious pair of newfound friends, Simba will have to figure out how to grow up and take back what is rightfully his. The all-star cast includes Donald Glover as Simba, Beyoncé Knowles-Carter as Nala, James Earl Jones as Mufasa, Chiwetel Ejiofor as Scar, Seth Rogen as Pumbaa and Billy Eichner as Timon, and utilizes pioneering filmmaking techniques to bring treasured characters to life in a whole new way.

What do you think? Would Simba have ended up like Scar? Let us know in the comments below.

Comments Off on Would Simba Have Been the Next Scar If Mufasa Survived?