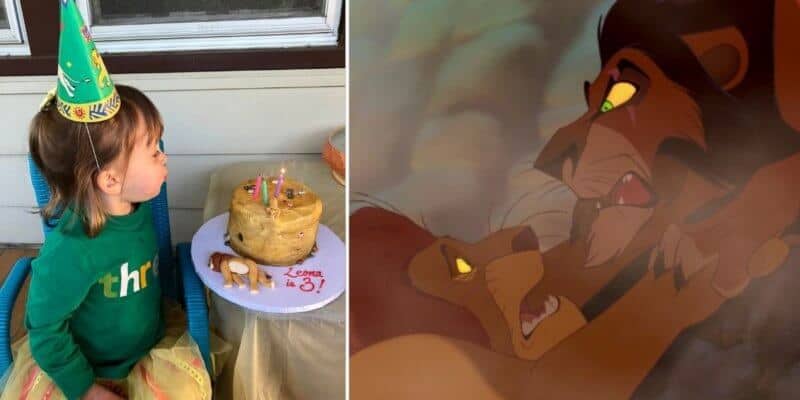 For many Disney diehard fans, celebrating a special milestone with a Disney-themed party is a dream come true. Disney-themed weddings are known to have the most gorgeous Disney-inspired cakes with classic scenes from Disney films.

But this was not the case for one family. A little girl from Saint Paul, Minnesota became a viral sensation as her uncle shares why she wanted the Lion King’s most heartbreaking scene on her birthday cake.

As many of us can relate, three-year-old Leona Feigh’s favorite Disney film is The Lion King (1994). In an interview with CBS Minnesota, Leona’s mother states that her birthday request was to have her favorite character, Mufasa from the Lion King on her birthday cake, but she didn’t want him standing on pride rock. Her hilarious request was to have one of the worst scenes in Disney history, Mufasa’s death.

Her response to why was probably one of the cutest answers to come from a young Disney fan. Leona shared with her mother Alison that everyone who was invited to her party would be so sad glaring at the heartbreaking cake and refuse to eat it. This would allow Leona to enjoy her Lion King cake all to herself.

“I felt really embarrassed asking [the bakery] because I thought they would think I was a horrible parent,” Alison said. “I was like, ‘So here’s the thing, this is what my child said, I thought it was funny. We’re just going to go with it.’”

Cake decorator, Rosalie Davis, from The Thirsty Whale Bakery, was intrigued to meet this little girl in person after decorating the Lion King cake and hearing this story from Leona’s mother.

Leona’s uncle, Casey Feigh, was so impressed by her comedic personality, that he decided to share it with his Twitter fans. The morbid Lion King cake tweet reached over 750K likes as @caseyfeigh states:

My niece turned 3 today!! She asked for a Lion King cake but specifically the moment where Mufasa dies, because “everyone will be too sad to eat the cake and it will be all for me.”

My niece turned 3 today!! She asked for a Lion King cake but specifically the moment where Mufasa dies, because “everyone will be too sad to eat the cake and it will be all for me.” pic.twitter.com/UOatqCUSj0

Her mother shares that her daughter is indeed very sweet and empathetic despite her cake request and says Leona wishes to have a Cinderella-inspired cake when she turns four, with, of course, the Evil Stepmother being the star of the show.

Have you celebrated a special milestone in Disney fashion? Let us know your story in the comments below!