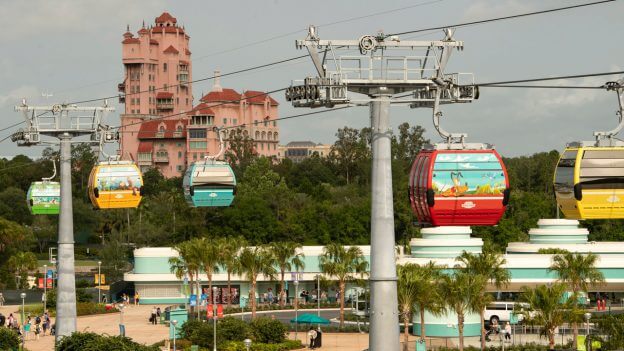 Frequent Disney vacationers and Orlando residents are professionals when it comes to planning a Walt Disney World vacation. As a fellow Disney World fan that lives outside the United States, I know that over time, many changes and updates happen at the Disney Resort that I may have missed from my last visit.

Luckily, Disney fans are eager to share updated information with the Disney community, especially when it comes to dining. After organizing a trip for myself in October to Walt Disney World, I thought it would be fun to research Disney Skyliner resort hopping and find good places to stop and eat.

The Disney fans have spoken

Disney fans on Reddit can be extremely helpful when planning your trip. I came across a post of a Disney fan who is planning to stay at Disney’s Yacht Club Resort with his family and asked Disney fans where would be the best spot to eat after a ride on the Disney Skyliner.

For those of you who are not aware, Disney’s Yacht Club is just a short walking distance to the Skyliner station in EPCOT. The Skyliner connects to two theme parks, Disney’s EPCOT and Disney’s Hollywood Studios. It also connects to four Disney Resort hotels: Disney’s Pop Century, Disney’s Caribbean Beach, Disney’s Art of Animation, and Disney’s Riviera Resort.

The Disney fans have spoken. Here are just some of the best places Disney fans shared would be a great spot to dine while hopping on and off Disney’s Skyliner.

The very first answer was from Disney and Reddit fan @dancingdirty who wrote,

I would look into Topolino’s Terrace at the Riviera!

Disney’s Riviera Resort is a classic European getaway. Inspired by modern masterpieces of France and Italy, this resort offers elegance and class. As far as dining goes, Topolino’s Terrace was rated number one for the best dining experience near the Disney Skyliner. With its rooftop views, airy accommodations, and spectacular European-inspired cuisine, you will not find one bad thing about this place.

If dinner may be too fancy for your little ones, many Disney fans suggest character dining called Breakfast à la Art with Mickey & Friends.

This place is definitely a very popular place and offers quick service dining options as @philosophical_convo on Reddit states,

Topolino’s Terrace is incredible, if you can get a reservation!

If you’re not able to get one, I actually think that the quick-serve dining at Riviera is surprisingly good as well. There are tables right next to the water with a great view of the main promenade of the resort as well as the skyliner and Caribbean Beach. I’ve had the cheese and charcuterie plates, a flatbread, and a couple of sandwiches and I’ve been pleasantly surprised by how good they all were.

Other Dining Locations Near the Disney Skyliner

I was gonna say primo piatto as well. It’s one of our favorite quick services, cool, clean, quiet, nice views if you decide to sit outside. Fantastic food as well.

If you want some kind of cafeteria setting, there’s pop century and art of animation. You also have all of Hollywood studios and Epcot. Most of the dining in Caribbean beach is closed right now, but the riviera has fantastic food. At the Epcot stop there are also the nearby boardwalk and beach club and yacht club resorts. We love going to beach club for food.

Reddit and Disney enthusiast @Disney_Travel_Dad shares that although he agrees with Topolino’s Terrace being one of the best spots, he suggests a popular quick-service dining option called Landscape of Flavors that offers breakfast lunch dinner and late-night snacks and great options including delicious pizza, burgers, salads, pasta, desserts, food to go and more.

I second this! Also if your kids are really into Cars/Nemo/Lion King/Little Mermaid you might want to check out Art Of Animation. The food won’t be on the same level as Riveria, but there are giant characters and artwork around the resort and main dining hall that your kids will love.

Many Disney fans enjoy Caribbean Beach Resort and with many dining options like Centertown Market, Banana Cabana, Sebastian’s Bistro, and Spyglass Grill which offer delicious Caribbean flavors! Check out this amazing Coconut and Pineapple Bread pudding you can find at Banana Cabana!

I’m not sure the name of the restaurant, but the QS at Caribbean Beach is pretty solid. Okay, maybe not the whole menu, but the Cuban sandwich is amazing.

We do know currently Sebastian’s Bistro is closed at this time, so please check Walt Disney World’s website for more information on updates on restaurants, reservations, and menu items.

What’s your favorite spot to eat while Skyliner resort hopping? Let us know in the comments below!

Need help planning your Disney adventure? Our friends at Academy Travel can guide you to the most spectacular Walt Disney World trip yet!