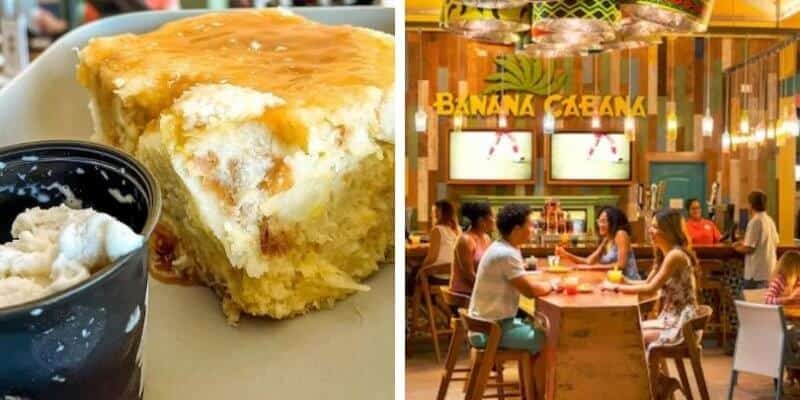 Walt Disney World is known for having a Disney cult following with its brown sugar and banana savory bread pudding located in ‘Ohana at Disney’s Polynesian Village Resort, but did you know the famous bread pudding with bananas foster has a new sister?

This new Disney favorite dessert has a tropical flavor and has become the new bread pudding rave — And it can be found at Banana Cabana at Disney’s Caribbean Beach Resort!

In an Instagram story, The Lost Bros (@thelostbros) explain that the chef of ‘Ohana has moved to the Banana Cabana pool bar outside of Disney’s Caribbean Beach Resort and concocted a new disney recipe with loads of coconut inside the bread pudding. If you’re not aware, ‘Ohana in Disney’s Polynesian Village Resort has been closed ever since the Disney World phased reopening began in July 2020. The good news is, if you are looking for the iconic bread pudding with ice cream, Guests can order it at Kona Café.

But if you aren’t visiting Disney’s Polynesian Resort, don’t worry because The Lost Bros took to Instagram after visiting Disney’s Caribbean Beach Resort in Walt Disney World because they got to try the new and reimagined ‘Ohana bread pudding.

This new Disney World bread pudding tasty and tropical treat includes pineapple and coconut, topped with a massive amount of caramel sauce and paired with a side of vanilla ice cream. They shared:

i know this sounds like the beginning of a bad joke bar joke BUT…a chef from from ‘Ohana moves over to Caribbean Beach Resort and created a NEWWWW bread pudding!!!!! the ‘Ohana bread puddings new sibling is a coconut pineapple, is $10, and HUGE!!

u can get this new bread pudding at Banana Cabana of all places and it 100% is worth traveling for!! it’s on the skyliner so you can get to it and also have a great lunch or dinner at Banana Cabana!! this was 5/5 cody t heads no doubt~

head to our story for the full review and TAG A FRIEND IN THE COMMENTS THAT U WOULD EAT THIS WITH!!!

Which bread pudding is better?

According to The Lost Bros, they said they actually prefer the Banana Cabana version over ‘Ohana’s version — “I prefer this one over the one in the Polynesian right now,” they wrote on their Instagram story.

They compared the layer of pineapple that sits on top of the bread pudding at Kona Café to the coconut flavor throughout the entire bread pudding they received at Cabana Banana and raved this new recipe won them over. For only $10, they were amazed at the portion size and how good this new bread pudding with ice cream actually was.

Disney World Guests might have a different opinion as the original has a special place in many people’s hearts. I personally love the original, but I am a huge coconut fan, so I am excited to run to Banana Cabana and give my own review!

We would love to hear if you’ve tried this new bread pudding and what your review is of this new tropical Disney dessert. Regardless, we’re excited and say bring on more bread pudding!

Have you tried the new Bread Pudding in Disney’s Caribbean Resort yet? Let us know in the comments below which one you prefer!

Do you need some help planning your next Walt Disney World adventure? Our friends at Academy Travel are EarMarked Diamond, want to know more, click the link for more information.