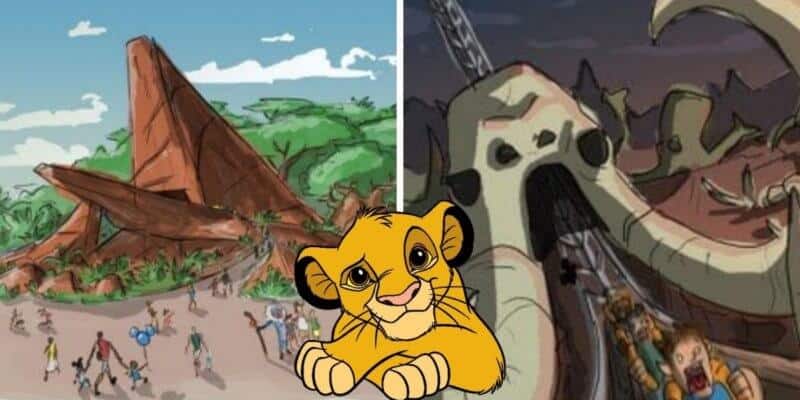 Disney’s Animal Kingdom is home to several themed rides including Kali River Rapids, Dinosaur, Expedition Everest, Kilimanjaro Safaris, and more. But, for a Disney Park themed around animals, many fans say there is a lack of attractions and rides portraying Disney animated films based on wildlife. One example of this is The Lion King.

Though there is a show themed after the popular 1994 animated film, Festival of The Lion King, there really isn’t much else representing the award-winning movie.

Well, one Disney fan decided to take things into their own hands and create an entire ride based on The Lion King that would fit perfectly into Disney’s Animal Kingdom.

One Reddit user, who goes by chadosaurus99, shared their concept art for an attraction based on The Lion King, and let’s just say it is mind-blowing! For starters, the ride would be based in Pride Rock, as seen in the concept art by chadosaurus99 above.

chadosaurus99 also shared what Pride Rock would look like at night, which is absolutely stunning. You can see Disney Guests walking up to Pride Rock with Mickey balloons and everything.

Look closely and you will see Guests stopping to take pictures with the one and only Rafiki!

While aboard the ride, which was designed by chadosaurus99 to be a log flume type attraction similar to Splash Mountain, you can see Guests riding through the jungle where Simba meets Timon and Pumbaa.

Related: Did You Know This Hotel Wakes Up Guests With A Disney Song!

Moving along, Guests encounter the iconic “Hakuna Matata” scene from the animated film. Guests will float past animatronics of Simba, Timon, and Pumbaa as they belt out the iconic lyrics to the award-winning song.

The last concept art image that chadosaurus99 shared shows Guests zooming out of the Elephant Graveyard, directly through one of the famous skeletons.

Disney fans commented on the Reddit post, sharing their love and support for this idea! In fact, one user, who goes by colebrv, wrote:

The fact The Lion King never had a ride is crazy. It was the biggest box office of any animated movie for nearly 2 decades and consistently sells merchandise since the film debuted. Its a shame

It surprises me too. And honestly, there’s a surprisingly huge lack of Tarzan at Animal Kingdom as well, considering it was part of the Disney Renaissance and is still one of their most popular animated movies!

This is actually something about WDW that drives me nuts in general, actually. Some movies get so much attention—and then other movies (such as Mulan, Tarzan, Pocahontas, and Hercules) get little-to-no merch or rides or attention at the parks whatsoever. It makes no sense and it seems so arbitrarily chosen, which movies get a lot of merch/rides/attention.

Another Reddit user, April_Adventurer, expressed their love for this idea, writing:

This would be amazing! Throw in some animatronics, a great soundtrack and theming, some magic and everyone would love it.

Being a huge fan of The Lion King, I, personally, would love to see this brought to life. The concept art that chadosaurus99 created is absolutely stunning and extremely creative!

What do you think? Should Disney create a The Lion King-themed ride for Disney’s Animal kingdom? Let us know in the comments below.