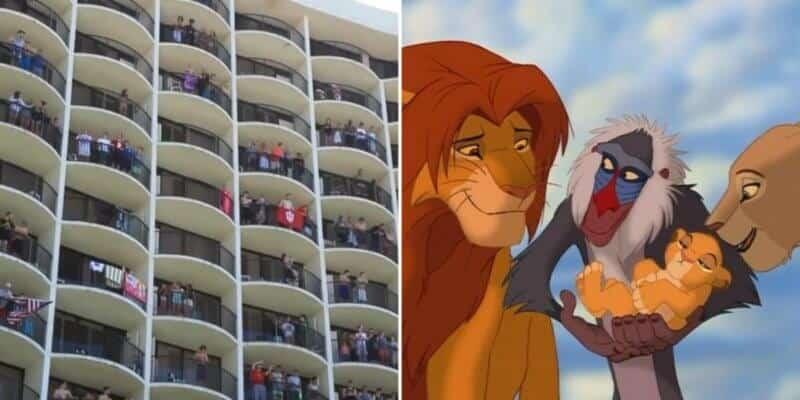 While Disney Theme Parks have become a very popular weekend getaway, many of us are still counting down the days when we can return to our beloved Disneyland or Walt Disney World Resort. While I am currently planning our trip to Walt Disney World for the 50th anniversary, my family and I enjoy getting in all the Disney we can by watching Disney films and playing Disney trivia games.

After a wild afternoon of Disney trivia, we came across a question that stumped us completely and left us amazed! We learned that a Holiday Inn in Florida plays a classic Disney song to wake up spring breakers.

I couldn’t believe this story as I looked at my husband in disbelief and asked if he had known about this since he is the Disney Trivia king. I wanted to share this story immediately with all other Disney fans who might have missed it.

Back in 2012, The Holiday Inn located in Panama City Beach Florida would alert hungover and groggy spring breakers by blasting “The Circle Of Life” song from the classic Disney film The Lion King. This quickly became a spring break ritual and according to ABC News, a marketing director of Holiday Inn states,

“We only do this for spring break,” Philip Colvin, director of marketing for the Holiday Inn Resort told ABC News. “We generally start our poolside entertainment at 11 o’clock and spring breakers tend to sleep that late anyway, so that’s when we play it.”

He sites the fact that the “The Lion King” was an incredibly popular movie when many of his hotel patrons were young, so the song evokes a bit of nostalgia—and compared to many popular songs played at nightclubs, the theme is family friendly.

At 11 a.m. slews of sleepy spring breakers meet out on the balcony and cheer as the song echoes around the resort. Guests were even seen carrying a Simba stuffed animal (that was most likely purchased at the Disney Store)  impersonating Rafiki’s pose and singing Elton John’s song at the top of their lungs.

I went straight to the source and called Holiday Inn to ask if this ritual was still a thing after all this time. An employee stated that she gets used to this question as hundreds of spring breakers call every year ensuring this song will be played during their stay.

Being a frequent traveler to Panama City Beach, I could not believe I was not aware of this. After much research, I came across a video that hit 1,649,955 views on YouTube. Check out this video from springbreakpcbeach showcasing an everyday morning at Holiday Inn, Panama City Beach.

Disney Guests can also find our favorite safari animal friends in Disney’s Art of Animation Resort in Walt Disney World. Lion King fans are welcomed to stay in a Lion King-themed suite, showcasing the gorgeous sunset colors we remember in the film. While roaming around the resort, be sure to spot Mufasa, Simba, Timon, and Pumba located in the heart of the resort.

Be warned, Scar and even those slimy sidekicks Shenzi, Banzai, and Ed are found in the Isle of the Lost playground for children.

Our family had such a memorable time here and every night after our long day at a Disney Park, my two little lions, John Marcus and Ellora would boot it to the playground before heading to our suite. Here’s a small clip of our adventure inside the Isle of the Lost which they called the ‘Hyena Cave’.

Although I have joined spring break in the past, and have now outgrown that young and wild experience, rest assured, I will be making my next trip to Panama City Beach at the Holiday Inn just so I can experience this amazing Disney moment.

Have you experienced this amazing Lion King event? Let us know in the comments below!

Want to visit Disney’s Art of Animation Resort in Walt Disney World? Our friends at Academy Travel can help!