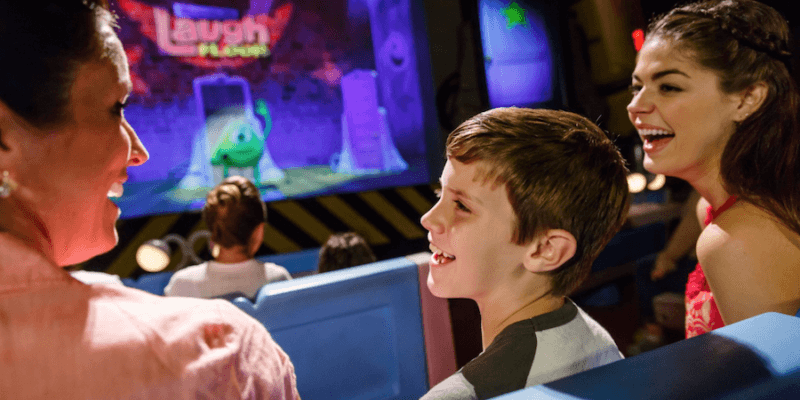 Disney has officially shared the exciting news that Monsters, Inc. Laugh Floor will be returning this summer! Here are the details.

Related: How to Watch ‘Monsters At Work’ on Disney+

We’re also excited to share that you’ll soon be able to visit those monsters of comedy in Monstropolis and chat with a certain sea turtle at The Seas with Nemo & Friends. Mike Wazowski will begin welcoming humans to the Monsters, Inc. Laugh Floor at Magic Kingdom Park on August 8. And beginning August 21, you can get your most pressing questions answered during Turtle Talk with Crush at EPCOT. Duuuude!

Monsters, Inc. Laugh Floor has been closed for quite some time. The Walt Disney World show did not reopen when Magic Kingdom reopened in July 2020 after the parks were shut down for a few months amid the pandemic. Later on, in October 2020, it was reported that the Laugh Floor Cast Members were laid off. The sign was later removed, and then reappeared outside the show building. Now, it’s been confirmed by Disney that the show is coming back!

Like the Laugh Floor, Turtle Talk with Crush has also been unavailable at EPCOT for over a year. We, like other Walt Disney World Guests and Disney fans, are thrilled to know that more entertainment is coming back to the theme parks. We can’t wait to see some of our favorite shows and entertainment offerings later this summer!

Monsters, Inc. Laugh Floor takes you into the world of the Monsters, Inc. film and television franchise. At the end of the original film, Monsters, Inc. begins utilizing the power of laughter instead of screams. And now, at Magic Kingdom, you can be a part of it!

Below is the official description of this attraction:

Got a Good Joke?

Text your favorite joke before the lights go down and it could be used in the show! Watch Mike Wazowski’s video while you wait and listen for the instructions. Standard text messaging fees apply.

If you or your children are huge Finding Nemo and Finding Dory fans, then this Pixar experience is for you. This fully interactive attraction allows humans to actually interact with Crush, the beloved and hilarious turtle from the Pixar films!

Below is the official description of this attraction:

Shoot the Breeze Under the Seas

Does the return of live entertainment offerings make you want to book a trip to Walt Disney World Resort in Florida? Us too! Click here for more information and to book the vacation of a lifetime!