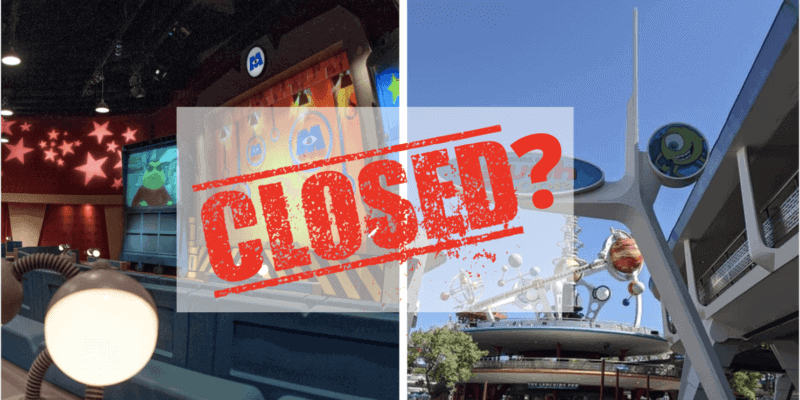 When The Walt Disney Company announced entertainment layoffs last week, Disney World was hit hard. The Actors’ Equity Association announced that about 720 of their 790 members had been impacted by the latest round of layoff notices.

Magic Kingdom’s Monsters, Inc. Laugh Floor was one of the first shows confirmed to have had its entire cast and crew laid-off.

Today, we have NEW photos of the Tomorrowland attraction. Signs for the show have been removed, but it has not been officially canceled by Disney.

Here, we see what is left of the main signage for the Disney World show.

In this photo, we can see where some Monsters, Inc. Laugh Floor signage used to hang.

Although the Stand-By Entrance and Disney FastPass+ Entrance queue signs are still hanging right now, it is likely that they will also be removed in the near future if the signage-removal trend continues at this particular Tomorrowland venue.

Although Walt Disney World officials have announced that live entertainment and stage shows will return to the Resort’s four theme parks — Magic Kingdom, EPCOT, Disney’s Hollywood Studios, and Disney’s Animal Kingdom — at a later date, the removal of the Monsters, Inc. Laugh Floor signs does make one wonder if this show is gone for good.

It is worth noting that the show still has a wait time listed today, though the official website and the My Disney Experience app lists it as “Temporarily Unavailable.” Its queue — both interior and exterior spaces — is being used as an extension of Buzz Lightyear’s Space Ranger Spin.

What do you think the future of the Monsters, Inc. Laugh Floor has in-store for the attraction?