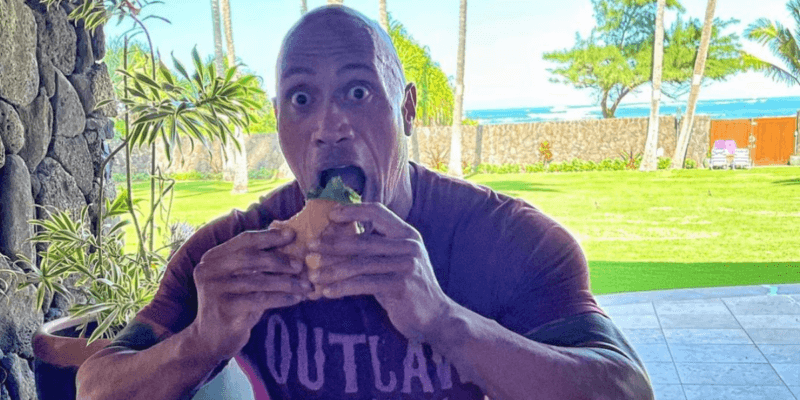 If there is one thing that Disney Parks are known for, it’s the massive amount of delectable goodies that can be found in all corners of the theme parks. There are too many delicious treats to count, and finding your favorites can be an adventure in trial and error. Dwayne Johnson, as a huge Disney fan himself, has spent a lot of time at the parks and, while promoting his new film The Jungle Cruise, shared what he would include in his ultimate Disney cheat meal.

While there are hundreds — if not thousands — of food choices to make, The Rock has really stuck to the classics when it comes to his favorites to have a cheat meal with.

First up on the list is the adorable Mickey shortbread cookie. The cookie is delicious and buttery with a chocolate/white chocolate coating to look just like the head mouse himself. What is great about this cookie is that is it perfect to eat on the go, or you can get it at the end of your Disney night, and it is just as yummy the next day.

Next up on The Rock’s go-to cheat list may be one of the most perfect Disney snacks — the Mickey head-shaped pretzel. This salty treat can be found at numerous carts throughout Disney Parks. While Johnson’s go-to is the classic, salted version, Disney does not limit itself to one kind of pretzel. Different locations can also sell cream cheese stuffed pretzels with jalapeño, as well as cream cheese filled and covered in cinnamon sugar.

For those who love the classic pretzel, but are looking for something extra, Disney also sells hot cheese sauce that is perfect to dip your salty, soft, and chewy treat into.

Number three on Dwayne Johnson‘s list of favorites is one that has divided Disney fans for years — the hot, juicy, and absolutely enormous turkey leg. To some Guests, they can’t visit Disney without munching on one of these. To others, the overwhelming size is too much for it to be appealing. However, The Rock is a big, strong guy, and it is a great way for him to fill up on a protein-packed option.

What comes next on The Rock’s list may be his most indulgent choice. The Mickey waffle — which the actor says are “my jam” — is his favorite breakfast item, but Johnson is not content with just a plain old Mickey waffle. When Johnson wants to go all out, he loves to top his waffle with peanut butter (one of his favorite foods), toasted coconut, whipped cream, AND syrup. Not too sure if that is considered breakfast or dessert at that point.

A cheat list would not be complete without a refreshing drink to wash down all that food with. For his pick for a top drink, the Jungle Julep is Johnson’s choice. Of course, he may be a little biased, as the drink theme fits closely with his newest movie, The Jungle Cruise. The Jungle Julep — which is alcohol-free — can be found at Bengal BBQ in Adventureland and is a fruity, frozen concoction that is made with a combination of pineapple, orange, lemon, and grape flavors. It is the perfect treat for a hot day.

There was one snack that also made an appearance, mainly because it is one of the most popular and iconic treats at any Disney Park, the pineapple Dole Whip. The frozen soft-serve treat is currently being featured in a specialty sundae and served in a Jungle Cruise boat, so it could not be left out completely!

The Jungle Cruise had its Disneyland premiere last night and will come out simultaneously in theaters and on Disney+ on July 30.

What are your favorite Disneyland cheat day snacks? Let us know in the comments!