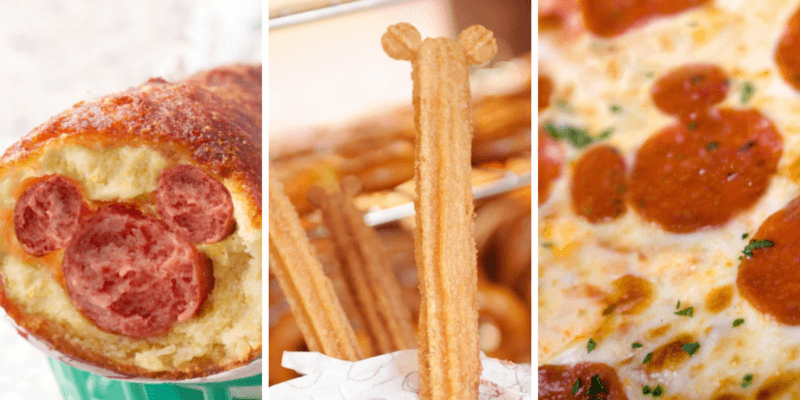 We love Mickey-shaped foods. And while Disney Guests have their traditional theme park picks of Mickey Mouse chicken nuggets, Mickey waffles, and Mickey pretzels, Disney has thrown us a silly curveball while appealing to our tasty senses.

… April Fool’s day gets us again!

These are real photos! Oh My Disney shared these drool-worthy pics in 2014, and we just had to dig them up in honor of the crazy things Disney has shared over the years for the spring holiday.

Below you can find some of our favorite Disney April Fools’ jokes shared by Disney themselves!

This was our favorite Disney April Fool’s joke. The Disney culinary team went to a lot of trouble not only to create these delectable Mickey Mouse masterpieces but also to photograph them elegantly… we bought the gag, hook, line, and sinker!

It’s not often that new Mickey-shaped foods debut on Disney menus, but we sure wish a few of these were the real thing. Wouldn’t you love to dig your teeth into that toasted veggie burger (see photo below)?

Did Someone Say Kale Churros?

This was a personal favorite Disney April Fools‘ joke. Churros have always been a top Disney Parks snack and in 2018, Walt Disney World decided to have a little fun with them. In a fully produced, 80s soundtrack-laced short, Disney showcased a faux snack… the Kale churro.

While we love both salads and treats, we were equally intrigued and put off at the same time by this “new” food. But a few years later, we’re so starved for a Disney fix, we’re pretty sure we’d try them. The simple caption for this video stated:

We invented a new kind of churro. For when you want salad and dessert at the same time. #WaltDisneyWorld

We invented a new kind of churro. For when you want salad and dessert at the same time. #WaltDisneyWorld

The Mickey Mouse YouTube channel posted a 42-second video with several iconic looks of Mickey’s 90 years of style in 2019. A fun look into mickey’s sartorial accomplishments, photoshoots gone wrong were strung together in a playful blooper reel for April Fools’ Day. The caption reads:

Check out this never-before-seen blooper reel from Mickey’s 90 Years of Style shoot in honor of April Fools’ Day, and click to watch the full original video of Mickey celebrating his most iconic looks.

A Disney Park prank created for food lovers, Snears were marketed as “the latest innovation in #WaltDisneyWorld snacking.” The video shared on social media was hilarious, drawing on favorite park snacks stored in a clear Mickey Mouse ears headband.

Get your #Snears on! Check out the latest innovation in #WaltDisneyWorld snacking, and tell us which snack you’re going to style your Snears with. 🍭 🍪 🍿 pic.twitter.com/0ZqPyyK8fe

A Lilo and Stitch-themed Spot the Difference was posted in 2019 (man, 2019 was a Goofy year (pun-intended!) as a Tweet. It was a sly addition to the Disney April Fools’ repertoire.

We’ve counted approximately 626 differences between these two pictures of Stitch. How many can you find? #AprilFools pic.twitter.com/IgHo9KLNlB

Which of these Disney April Fools’ jokes was your favorite? We’re still reeling for all of those Mickey-shaped foods that will never be! Leave us a comment below, and don’t forget to share a laugh today!