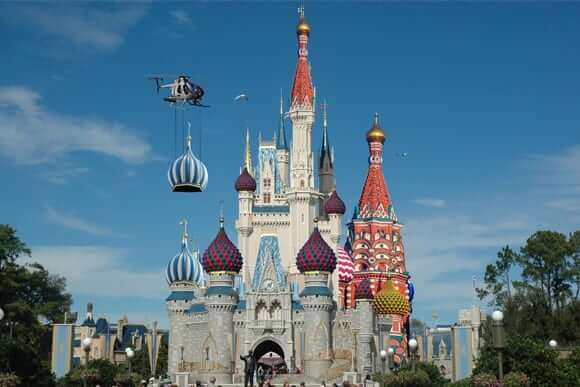 For me, April Fool’s day is like internet Christmas.  I love the pranks and fake products that weave their wacky way across the web.

It started online years ago when Google began announcing amusing absurdities every April. The “TiSP,”toilet ISP was their first – flushing a wire down to toilet to use the network of neighborhood plumbing pipes for a better net connection. This year did not disappoint, from Cheetos orange glow spray tan to Quilted Northern’s “uSit,” the web was a wonder of weirdness.  Listed below are my favorites from the day.

Topping the chuckle chart this year was a local story from a local newspaper, Orlando Weekly.

Capitalizing on the low approval ratings of the President and the uproar of his animatronic arrival at the Hall of Presidents at Walt Disney World, their Cinderella’s Castle Russian overlay was the best.  Click the here to read the full, satirical story.

Think Geek came out of the gate with a selection of faux toys.  The first of these to catch my eye was the Bicycle Horn of Gondor, a fun mash up of “Lord of the Rings” and a child’s bike ride.

The next Think Geek item that stood out from their other offering (swear jar, hot pocket sleeping bag, swim desk) was the “Where’s Barb?” book.  This “Where’s Waldo?” treatment of “Stranger Things” was pure genius.

One theme of the day seemed to be an attempt to get as gross as possible (Subway ice cream, Buffalo Wild Wings Rally Beard Sauce). The most amusing of which was Whopper Toothpaste from Burger King.

Tech took a hilarity hit, too.  From the T-Mobile total coverage onesie from to Petlexa from Amazon, the best of these had to be the Google Gnome.

Did you get pranked online this past weekend?  What was your favorite gag?  Share you chuckle in the comments below.

Comments Off on Foolish Fun for the First: The best Internet pranks from April Fool’s Day 2017