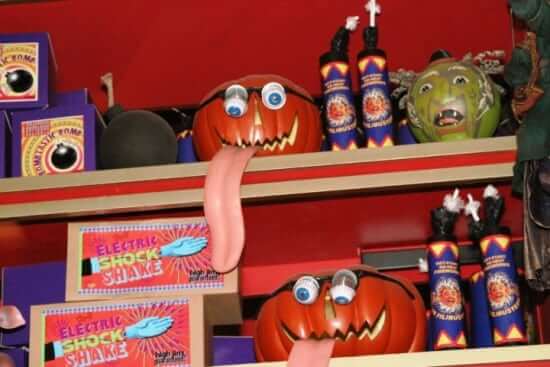 As April Fool’s Day descends upon us tomorrow, what’s a wizard (or Muggle) to do in order properly prank his or her pals?  Fortunately there is a magical solution!

Zonko’s Joke Shop in the Wizarding World of Harry Potter at Universal Studios has/had all the dung bombs, Frog Spawn Soap and Nose-Biting Teacups to produce the perfect prank.

April Fool’s day is referenced in literature as early 1392 (“Nun’s Priest Tale”) in the “Canterbury Tales.”  The hilarious holiday might be a few hundred years older. Somewhere around the turn of the fist millennium, Hogsmeade was established by Hengist of Woodcroft.

Zonko’s Joke Shop, part of this first all wizarding village, may have been around almost as long. Muggles first learned of the prank proprietor in J.K. Rowling’s third Harry Potter novel, “Harry Potter and the Prisoner of Azkaban.”  The Marauder’s Map, after insulting Professor Snap, was suggested to be from Zonko’s.  Ron Weasely also made references to the joke shop when recounting his first Hogsmeade experience.

The wizarding joke shop is similarly referenced in the film of the same name.  Zonko’s is further referenced, briefly in several of the Harry Potter films that followed.  Zonko’s closed as Lord Voldermort’s second reign of terror took hold of the wizarding world. On June 10th 2010, muggles and wizards finally had the opportunity to visit Zonko’s Joke Shop for the first time.  Sharing a small building with Honeydukes (sweet shop), Zonko’s was part of the Harry Potter (Hogsmeade) themed area at Islands of Adventure.

Though it was part of the opening experience, the small joke shop was closed when Diagon Alley appeared at Universal Studios Orlando. Honeydukes took over the entire space.

Florida fans now have the option to purchase their pranks at Number 93 Diagon Alley, home to  Weasleys’ Wizard Wheezes (at Universal Orlando).  The bright orange multi-storied structure is a perfect replica seen in “Harry Potter and the Half Blood Prince.” For wizards (and muggles) who are out of floo powder or cannot find the resources to apparate, Top Party Ideas (click here) has a list of witchcraft and wizardry inspired tricks and jokes you conjure up at your own home.

What wizarding magical mischief are you planning for this first day of April?  Tell us about your perfect Potter-inspired prank in the comments below.