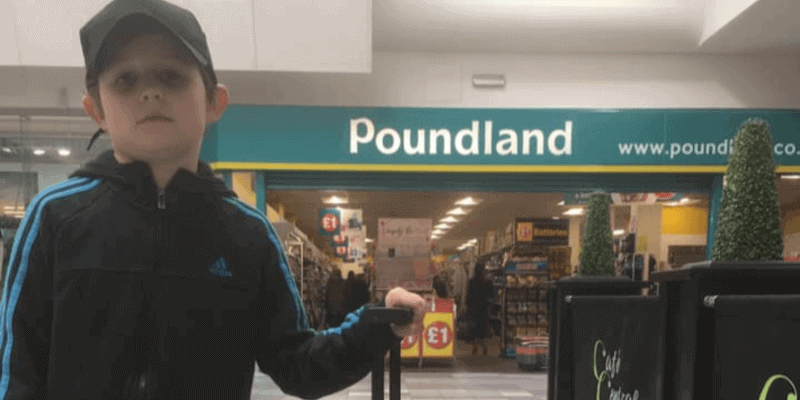 In one of the cruelest April Fools’ pranks of all time, a father made his son believe he was taking him to Disneyland on vacation, only to take him to Poundland, a British variety store chain, instead.

Disneyland has to be one of the most exciting places in the world for kids to experience. It’s truly one of the few places where dreams really come true. And one stand-up comedian, Joe Heenan, couldn’t help but take advantage of this by using this magical land as the ultimate tool for one of the meanest pranks, which could’ve sent some Disney fans over the edge.

To kick off this prank, Joe, who lives in Glasgow, told his son that he was taking him somewhere ending with “land” in the name, and naturally, the boy could only think of one place.

In the tweet below by Joe, the boy’s face says it all, with his extreme disappointment of being brought to Poundland. In the tweet, Joe says: “I told him we were going on holiday to a place ending with the land. He was like “Oh my god! Is it Disneyland?” He was so excited. Hahahahaha! #AprilFools”

I told him we were going on holiday to a place ending with land.
He was like
“Oh my god! Is it Disneyland?”
He was so excited.
Hahahahaha!#AprilFools pic.twitter.com/ltXZStkn18

The tweet currently sits at a little under 2,400 likes. However, some people on Twitter don’t find the joke to be comical at all. One Twitter user called Joe a “monster,” while another wrote: “I hope he puts you in a home on the 1st (of) April 2039.”

The hate doesn’t stop there; the post received many more replies, mostly negative. One asked for the boy to make sure his father took him to Disneyland after all, while tagging Disneyland Paris, Disney, Walt Disney World, and Disneyland Today in the tweet, asking for his father to “wait in the parking lot!” during the trip.

Upon looking back in Heenan’s tweets, it appears this isn’t the first time he pulled an April Fools’ prank on his kids. In 2016, Heenan tweeted an image of his children holding an empty box for an iPad with a paper inside reading “APRIL FOOL! HA HA.” It appears Heenan gets a kick out of these types of pranks.

#AprilFools
Told my kids I got them an iPad but it's just the box. pic.twitter.com/GvSymVkq91

Whether or not Heenan will actually take his kids to Disneyland is unknown. However, we’re not too thrilled to think about what the comedian has in store for next year’s April Fools’ surprise.

What are your thoughts on this prank? Let us know in the comments below!