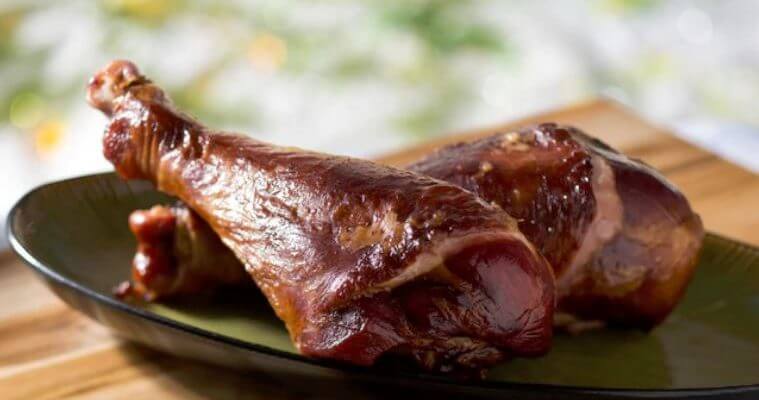 Turkey, stuffing, gravy, cranberry sauce, pumpkin pie – all of that is great for Thanksgiving dinner, but what if you are on the go at your favorite theme park and just want a hint of the holiday?

You turn to the turkey leg, of course.  That smoked greasy goodness that makes a magical meal portable.  Found at quick service food carts at theme parks from Universal Studios and Disney, this tempting treat is like having Thanksgiving all year long. While you can find turkey legs in theme parks around the world, they aren’t a Mickey Mouse original.  Just as the Walt Disney Company was starting to expand its empire in the 1970s, the large leg of America’s almost national bird was flying off the counters at renaissance fairs across the country.

Everything you wanted to know, but were afraid to ask

This tasty salt and smoke infused treat was such a hit that it soon found its way into Disney’s theme parks the following decade. The hand held hunk of happiness was first sold at Disneyland in Anaheim California and was such a succulent success it soon spread to the company’s other theme parks.  Over 2 million are sold each year!

Turkey legs come from big birds (apologies to the Henson Company, but no connection) in the upper mid-west.  Since these great gobblers average from 40-50 pounds, their meaty mouthwatering legs weigh in at an average 1 ½ pounds each (though some have been spotted offering a full pound more than that).

Consuming one turkey leg will bring in 1500 calories and over 5,000 mg of sodium (but, hey, you’ve earned those calories walking around the theme park all day, right?). Contrary to rumor these treats do not come the much larger Emu, but are, in fact, real turkey.

Such is the popularity of this Renaissance fair flavor, turkey legs have been immortalized in song and stores.  From turkey leg pants and t-shirts to inflatable drumsticks and head bands, if you love the leg there’s more than way to show your pride. Play along at home

For those who cannot make a quick trip to any of the above mentioned theme parks or don’t have a Renaissance fair coming to town anytime soon, there are a few ways to fetch the flavor and have it delivered to home. Of course you make this must have munchie at home too:

Have you enjoyed a turkey leg at the theme parks or a Renaissance fair?  What was your first impression?  Talk turkey in the comments below.