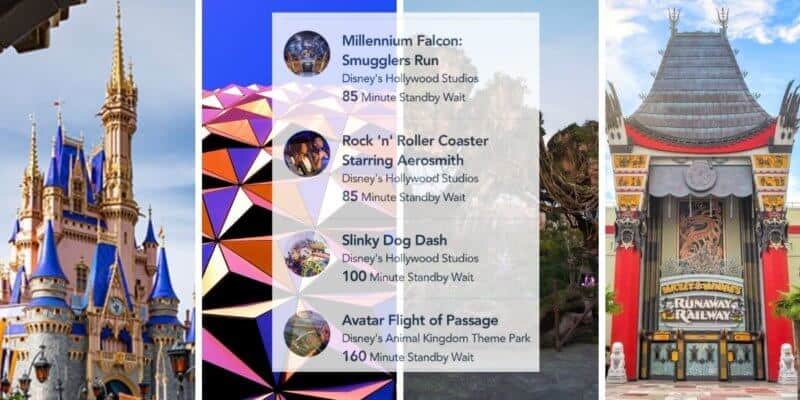 If you are planning on visiting Walt Disney World on your next vacation, prepare for long wait times as summer crowds have officially arrived at the theme parks. And with these large crowds, as well as an increase in capacity at Disney World, it’s clear that wait times have also increased.

As you can see in the screenshots below, at approximately 10:45 a.m. on July 18 (which is just a few hours after the theme parks opened), many of the wait times sat at an hour or longer!

In fact, Pirates of the Caribbean, The Twilight Zone Tower of Terror, Seven Dwarfs Mine Train, and Jungle Cruise were all 60+ minute wait times.

If you think those are long waits, you should see Mickey & Minnie’s Runaway Railway, Millennium Falcon: Smugglers Run, or Rock ‘n’ Roller Coaster, which all have an 85-minute wait.

But that’s not even the longest wait time in Disney World right now as Slinky Dog Dash posted a 100-minute wait and Avatar Flight of Passage posted a 165-minute wait (as seen in the screenshot below)!

The long wait times are not that surprising as CEO Bob Chapek confirmed that the theme parks — Magic Kingdom, EPCOT, Disney’s Hollywood Studios, and Disney’s Animal Kingdom — have already started increasing capacity once again, which you can read more about here.

At this time, we do not know exactly what percentage of capacity Disney World is operating at, but we know it is higher than 35%.

With all of this being said, if you have an upcoming Disney World vacation, expect to see a bit more “normalcy” compared to last summer when the theme parks first reopened after temporarily closing due to the ongoing pandemic. If you are visiting Walt Disney World in the near future, be sure to familiarize yourself with the current safety protocols as the theme parks have continued to modify the rules and regulations.

Are you surprised to see these long wait times at Walt Disney World? Let us know in the comments below.