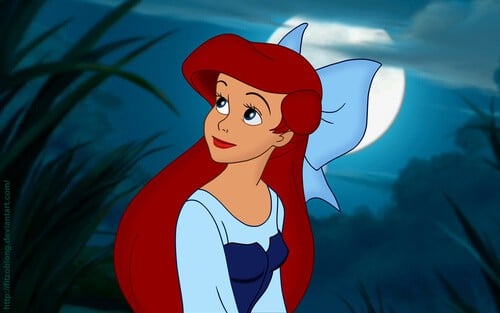 As a result of COVID-19 pandemic production delays, The Little Mermaid fans have been waiting for quite some time to see Halle Bailey’s live-action Ariel look. Now, the wait is over.

British publication The Daily Mail posted photos of Bailey on set in Italy to their official Twitter account:

EXCLUSIVE: Halle Bailey pictured for the first time as Ariel as she films The Little Mermaid in Italy

EXCLUSIVE: Halle Bailey pictured for the first time as Ariel as she films The Little Mermaid in Italy https://t.co/vsS3aO67fE

In the photos, Bailey is wearing a wetsuit and a mermaid tail! This has led most Disney fans online to presume that the cast is currently in rehearsals. It is worth noting that it is also possible CGI will be used for costumes in certain scenes of the movie, though nothing has been confirmed by Disney.

Ironically, the blue wetsuit almost looks like it takes inspiration from the famous blue dress Ariel wears during the “Kiss the Girl” scene in the original 1989 Walt Disney Animation Studios classic, The Little Mermaid.

Repost from @prince.eric9889 Rehearsals are happening for the live action #littlemermaid!

The film does not have an official release date at this time, but the full main cast has been confirmed. Joining Bailey’s Ariel are Awkwafina as the voice of Scuttle, Jacob Tremblay as the voice of Flounder, Melissa McCarthy as Ursula, Javier Bardem as King Triton, Daveed Diggs as the voice of Sebastian, Jonah Hauer-King as Prince Eric, and Emily Coates as an unknown character — though many speculate she will play Vanessa, Ursula’s human form.

At this time, it is unknown exactly how close the storyline of the live-action remake of The Little Mermaid will be to the Jodi Benson animated feature. We do know that Ursula’s backstory will be further explored, much like it is in the Broadway musical version of The Little Mermaid.

Currently, you can stream the animated movie on Disney+ anytime. The official description reads:

Ariel, the fun-loving and mischievous mermaid, is enchanted with all things human. Disregarding her father’s orders to stay away from the world above the sea, she strikes a bargain with a devious sea witch to trade her beautiful voice for legs. But can she also win a prince’s heart?

Are you looking forward to the live-action version of The Little Mermaid?