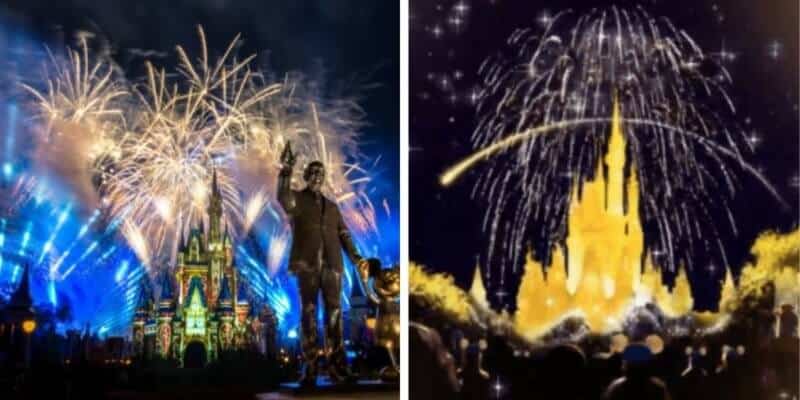 Considering we have not seen a nighttime show at any Disney Park since the temporary park closures in March 2020, the original announcement that fireworks are returning on July 1 at Magic Kingdom and EPCOT with Happily Ever After and EPCOT Forever was already incredibly exciting.

Now, we have just discovered that Magic Kingdom, Disney’s Animal Kingdom, and EPCOT will all be debuting new shows at each park for the 50th anniversary celebration on October 1!

Although many Guests may have already anticipated HarmonioUS at EPCOT, Magic Kingdom’s Disney Enchantment show is clearly the one receiving a lot of the buzz, considering many of us likely did not know if there would be any nighttime show changes, as nothing was previously discussed.

Although we only have concept art at this time (as seen above), we can see that all of Main Street, U.S.A. U.S.A. will light up in gold, along with the castle!

With Happily Ever After being gone for so long, it was interesting to see if Guests would be excited to possibly lose the show again, depending on if Disney World chooses to run both shows each night. Likely, that will not be the case, and Happily Ever After will have to hand off the torch until the anniversary is over to Disney Enchantment, as we saw with Disneyland Forever at Disneyland.

That being said, it seems that the majority of Guests are ecstatic to see a new show at Magic Kingdom! However, some are not too happy to see Happily Ever After have to leave so soon. Below, you can see a few of the comments Inside the Magic readers left on our Facebook page once we posted the announcement.

Billy D. is excited to be at Magic Kingdom on October 1!

we’ll be there to see the debut!

Stephanie F. is already making plans for when others come back to Florida to visit.

We gotta see it when you come back in October

Brian T. had a different idea, and would have rather brought back Wishes, which is one of the older nighttime shows, but still seems excited about the change.

hey should have brought back wishes!

Sara P. is excited to visit next summer!

Carmen F. had the same feeling a few other readers had about possibly replacing Happily Ever After.

Oh man. We aren’t going until November and we have been wanting to see HEA again!!!! This sounds eh…. I guess we will see this instead.

Madison K. was also worried about Happily Ever After.

Does this mean they are doing away with Happily Ever After?!

I hope they bring back happily ever after after the celebrations

Jane P. is ready to keep the announcements rolling.

The 50th anniversary celebrations will be running from October 1, 2021 throughout the following 18 months at the Walt Disney World Resort!

How do you feel about Magic Kingdom adding in Enchantment as the new nighttime spectacular?